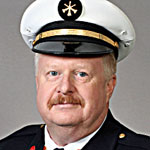 Gannon started his career with the city in 1981 as a Firefighter/EMT. He was promoted to captain in 1993 and to division chief in 2004.

He became a certified diver in 1983 and is still a member of the department’s dive team. He’s been dive master since 2004 and was instrumental in the development of the personal water craft rescue program in 2007.

Gannon manages the department’s fire suppression training and administrative services division. He has been in charge of the department’s fleet purchasing and maintenance, and coordinates service requests to keep the fleet in a state of readiness. He also was the department’s project manager for the recent rebuild of Fire Station #5 on Central Street.

Evanston Fire Chief Greg Klaiber says Gannon "has served our department with honor and distinction. His expertise in training, fire apparatus and equipment will be greatly missed."

The department will hold a retirement ceremony to honor Gannon at fire headquarters at 909 Lake St. at 2 p.m. on Friday, Nov. 12, his last day with the city,