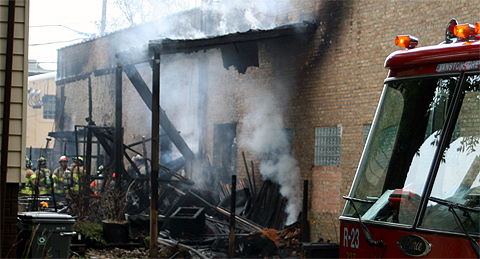 A fire broke out in a warehouse building on the northeast corner of Dewey Avenue and Payne Street this afternoon.

Most of Evanston’s fire units, and trucks from at least five surrounding communities responded to fire.

The blaze forced police to block off traffic for several blocks on nearby Simpson Street.

There were no immediate reports of injuries from the fire.

It’s not known what caused the blaze and fire officials were not immediately available to offer an estimate of the damage.

The building, which is managed by Robinson Rentals, has been for rent for some time and had recently undergone some renovation work. 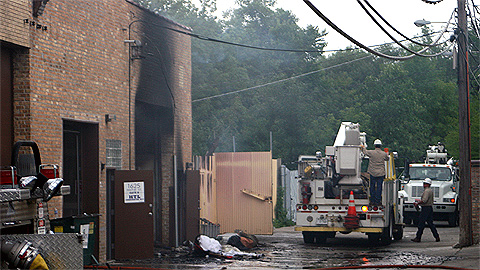 The fire destroyed a shed on the north side of the building and left heavy soot stains rising from a overhead door on the building’s east side.

The building is in the Dr. Hill Community, an area of mixed industrial and residential uses near the North Shore Canal and Green Bay Road which has been the scene of several major rehab projects over the past few years.