Broken glass littered the sidewalk in front of the Phoenix Inn Chinese Restaurant at 608 Davis St. this morning after a fire last night.

Evanston firefighters were called shortly after 10 p.m. Sunday — an hour after the restaurant's closing time — and found the rear of the restaurant building in flames.

The fire quickly spread to the second floor of the two-story structure — which houses several studio apartments.

Firefighters were able to extinguish the fire in about a half hour. 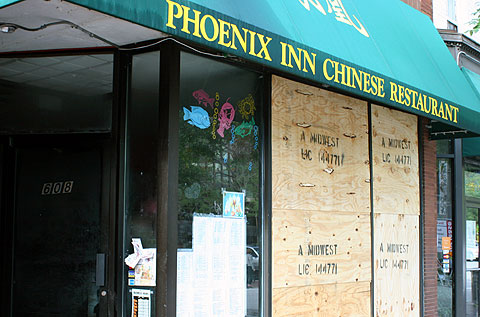 No one was injured in the blaze, but residents of the apartments were displaced and the restaurant is expected to be closed for some time for replairs.

Fire Chief Alan Berkowsky says all of Evanston's fire units plus a truck from Skokie were called to the scene and units from other communities were brought in to provide coverage at Evanston fire stations.

Update 2:45 p.m.: Fire investigators now say they believe electrical problems were the cause of the fire. They estimate damage to the building at $140,000. The four Northwestern students living on the second floor of the building reportedly have been able to find alternate housing.