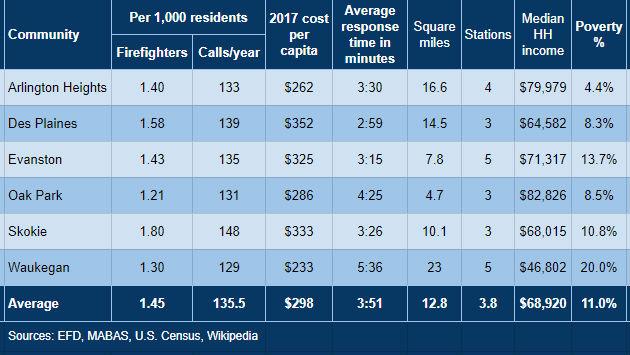 With cuts to the city’s Fire Department in Evanston’s proposed budget for next year, here’s a look at how we compare to other nearby communities of similar size.

The table above shows figures from the four largest communities in the MABAS Division 3 service area that includes Evanston.

(It excludes the Glenview Fire Department, which in addition to serving its namesake community with a population of nearly 48,000 also serves an estimated 12,000 additonal residents of unincorporated areas within the Glenbrook Fire Protection District.)

The data also includes Oak Park and Waukegan, two other metro area communities that are somewhat similar in size.

Much of the data comes from a memo distributed to aldermen by Fire Chief Brian Scott.

What we can see from the data is that:

If, as proposed in the new budget, nine firefighter positions were eliminated: