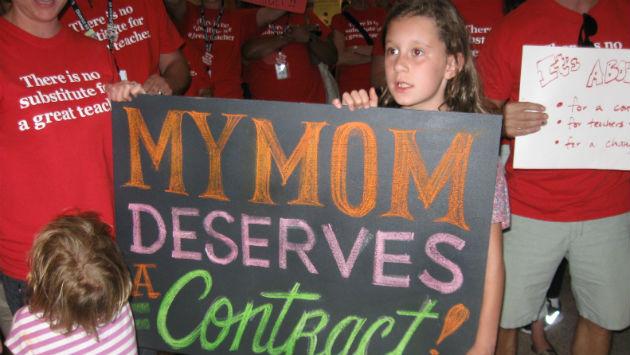 It was not a good night Monday for the Evanston/Skokie District 65 School Board. Outside the meeting room were teachers protesting the lack of a contract, while inside were supporters of an assistant principal with connections to a controversial consulting organization.

The teachers, all wearing red shirts proclaiming their membership in the District Educators’ Council (DEC), the teachers union, staged a noisy rally intended to embarrass the board into reaching an agreement on a new contract to replace the one that expired last month.

It brought a reaction from Superintendent Paul Goren that “we want a contract, too.”

But the real embarrassment came from a steady stream of 17 parents, teachers, and former colleagues of Joshua Seldess, who had been hired as assistant principal of Nichols Middle School, but whose contract was rejected by the board after he had already started on the job.

The story, according to a letter Seldess wrote to his supporters, was that he was offered the assistant principal position at Nichols Middle School in early August, subject to board confirmation.

“Aware of the fact that the District 65 Board had never failed to ratify a contract recommended by a qualified hiring committee,” he wrote, “I began work at Nichols on Aug. 8 in good faith pending board approval at the Aug. 29 meeting. Opening day was around the corner (Aug. 24) and there was work to do to prepare for students.”

Seldess had a premonition for what was about to occur, he said, when he was called to a meeting on Aug. 18 and 19 with administrators who said the board had expressed concerns at a closed session with his background with racial equity work, “specifically my affiliation with Pacific Educational Group, a nationally recognized racial equity consulting firm focused on eliminating racial achievement disparities in education.”

Seldess said that he was told that due to these concerns, “the board elected not to ratify my appointment at that time.”

Then after the Aug. 29 board meeting, he said, he was told that the board had voted 3-2 against approving his contract.

“They offered no further explanation,” he said, “but conceded when asked that their concern pertained to my alleged lack of middle school curriculum experience. Needless to say, this explanation did not align with any of my previous conversations about the board’s questions or concerns.”

Board policy prohibits members from discussing details of personnel matters, but two board members, when asked by Evanston Now for comment, denied that the affiliation with PEG had anything to do with their decision.

Said one: “I can assure you that was not the reason the hiring was not approved.”

And the other commented that “you couldn’t be further from the truth on the reason for nonconfirmation, and would strongly hope that you as a reporter wouldn’t make such assumptions without any evidence of the sort.”

Nevertheless, the 17 persons, including former colleagues of Seldess at New Trier High School and the Oak Park River Forest High School, heaped praise upon Seldess as an ideal candidate for such a position in Evanston, particularly after the board had issued an equity statement last month that would call for someone with just his background as an ideal candidate for the position.

An observer suggested that one explanation for the apparent mixup could be that the present superintendent and his top aides were not in their current positions four years ago when the participation of the Pacific Educational Group was a significant issue in the Evanston Township High School 202 board elections of 2013.

During that campaign, there were criticisms issued about the propriety of Evanston Township High School spending upwards of $350,000 to PEG for consulting services on racial equity. At public forums during the campaign, several candidates for the District 202 board declared they would have voted against those expenditures if they had been on the board at the time.

With elections scheduled for next April, it is not considered surprising that some board members might be reluctant to hire an assistant principal that had links to PEG despite his qualifications and approval by hiring committees charged with the responsibility of vetting candidates and recommending one for consideration by the board.

One of the speakers on Monday was Osei David Andrews-Hutchinson, a Chicago resident who said he worked with Mr. Seldess for six years at New Trier and contended that Seldess is the type of racial equity leader that every district should want to have on its team if it were serious about racial equity.

“If you, as a board of education, claim to want to build trust in communities, specifically in communities of color,” he said, “but decide to refuse to hire someone whose very mission in life is to do exactly that, with a proven track record and supportive racial equity leader colleagues around the country, how is that building trust or showing sincerety?”

Andrews-Hutchinson concluded: “I hope that you will find your way through whatever political or personal entrapments that encourage you to make such an ill-informed decision and see the bigger vision that is before us and live up to the motto that is on your website: Every child, every day, whatever it takes.”

Several other speakers, including Nichols parents and teachers, called for the board to reconsider their action and to take another vote.