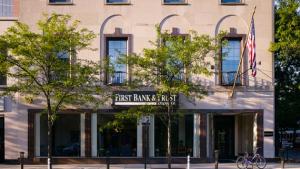 Evanston’s First Bank & Trust credits the impetus from the community’s recent “Evanston 150” activity as possibly being the catalyst that led it to become one of only about a dozen banks in the state to earn an “outstanding” CRA rating from bank regulators.

The Community Reinvestment Act (CRA) was passed by Congress in 1977 to encourage banks and other financial institutions to lend to all income levels, particularly low and moderate-income, and to abandon the practice of “redlining” in making home loans.

It was called redlining because the management of some banks would draw a red line on the map around neighborhoods that were not considered good credit risks, particularly in minority areas.

But CRA was also designed to encourage banks to pay attention to the community development needs of its market.

Since then, the national bank regulatory authorities have been required to examine how well banks were serving these areas, consistent with safety and soundness, and would rate them as either “outstanding,” “satisfactory,” “ needs to improve,”  or “substantial noncompliance.”

While there were no specific penalties involved in a poor performance rating, banks that earned a less than satisfactory rating were often found to be at a disadvantage when seeking regulatory approval for mergers, acquisitions, or new branches.

The latest CRA report on First Bank from the Federal Reserve Bank of Chicago that resulted in the “outstanding” rating covered a two-year period, 2011 and 2012.

The evaluation looked at the bank’s loan-to-deposit ratio, the geographic distribution of its loans, its lending to borrowers of different income and to businesses of different sizes, its response to substantiated complaints (there were none), and its community development activities.

The bank, founded in 1995, included former Evanston Mayor Jay Lytle as one of its managing directors and concentrated on lending to Evanston homeowners and small businesses. It also welcomed accounts from the many not-for-profit organizations in the city, even though many of these accounts were too small to represent significant profit potential for the bank.

It currently has accounts from about 850 not-for-profits, ”which far exceeded our expectations,” Lytle said in a recent interview with Evanston Now. “We’re so tied into the fabric of Evanston that if Evanston grows and prospers, the bank will grow and prosper,” he said.

And this is where “Evanston 150” enters the picture.

As the city neared its 150th birthday in 2013, Lytle helped form an organization in 2011, called “Evanston 150,” that involved the community in suggesting ideas to commemorate the city's milestone.

Among a number of other activities, Evanston 150 set a goal for the residents of the community to log 150,000 hours of volunteer activity in a single year.

Bank employees were encouraged to participate in the program, and while the bank set a goal of 1,000 hours, Lytle said they actually logged more than 1,500 hours, many of them during the CRA evaluation period.

Although the bank, like most banks, had regularly earned a “satisfactory” CRA rating, Lytle said he thinks the extraordinary community volunteer effort by its employees was a prime factor that pushed the bank into the “outstanding” category.