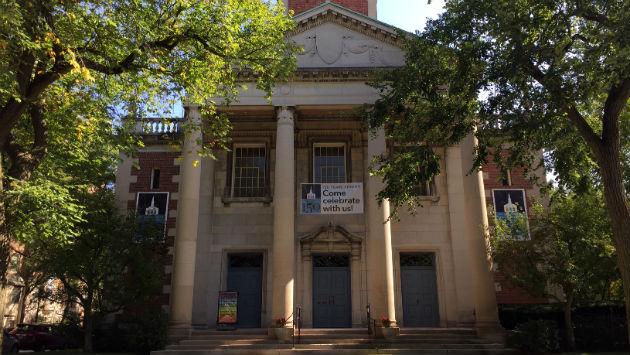 First Congregational Church of Evanston will be honored at Monday’s Evanston City Council meeting with a proclamation marking its 150th anniversary.

“We are truly honored by the mayor’s proclamation and the city council’s continued support of First Congregational,” said the Rev. Ann Rosewall, senior minister of First Congregational. “We are an open and affirming church that strives to be inclusive of all faith experiences, family types and backgrounds. No matter who you are or where you are on your spiritual journey, you are welcome here.”

Its founders included Julius White, who had been instrumental in bringing Abraham Lincoln to Evanston before Lincoln became president and who was later a Civil War general, Herman Powers, who became an early president of the Evanston village board, and other leaders.

Other members have included Charles Gates Dawes, the 30th vice president of the United States and the winner of the Nobel Peace Prize, and architect Dwight Perkins.

The church is affiliated with the United Church of Christ, a mainline Protestant denomination that traces its history to the Pilgrims. The UCC has its roots in the “covenantal” tradition, meaning that there is no centralized authority or hierarchy, but each church is self-governing.

The church’s sanctuary building is located on a small triangular piece of land east of Raymond Park at Hinman Avenue between Lake and Grove Streets. Originally owned by Northwestern University, the land was part of the parcel given by the university to the village of Evanston for a park. The church’s founders raised $600, which was paid to the village and the title reverted back to Northwestern, which then gave the land to the church.

The first church building in a Victorian Gothic style was completed in 1870 and burned in 1884. A second building, in Victorian Romanesque style, was built in 1886 but by 1925 had become dilapidated.

The current church, an example of Colonial Revival architecture, was designed by Evanston architect Thomas Tallmadge of the firm Tallmadge and Watson. Completed in 1927, the building reflects the style of New England Congregational churches.

As part of its 150th anniversary celebration, First Congregational this year will participate for the first time in the popular Open House Chicago event, sponsored by the Chicago Architecture Center. On Oct. 19 from 10 a.m. to 5 p.m. and Oct. 20 from 1 p.m. to 5 p.m. the sanctuary building at 1445 Hinman will be open to visitors.

“We look forward to welcoming Evanston residents and others to share in the beauty of our church and join us in celebrating our 150 years in Evanston,” Rev. Rosewall said.