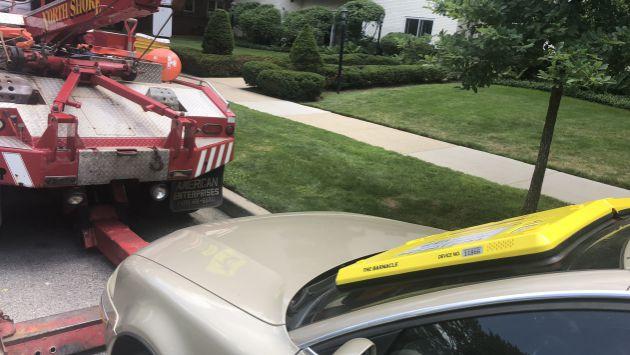 For the first time since the Evanston switched to a new approach to disabling the cars of ticket scofflaws, one actually ended up getting towed today.

Evanston last month switched from the traditional Denver boot system of immobilizing cars by attaching a clamp to one of the car’s wheels to attaching a giant suction-cup device called a Barnacle to the car’s windshield, blocking the driver’s view of the road.

The device is considered more efficient than the boot, because it can be applied more easily amd safely and motorists can remove it themselves once they’ve paid their tickets.

The city’s parking division manager, Jill Velan, says the Barnacle has been used about once a week for the past five weeks. Two of the people whose cars got the windshield-blocking treatment paid their fines online within 20 minutes and returned the Barnacle to the city the next day.

The other two paid the traditional way, at the city collector’s office.

Today’s tow happened from the 800 block of Oakton Street after a driver failed to respond within 24 hours of the Barnacle being attached to his or her vehicle.

Velan said she didn’t immediately have data available to compare how many booted cars got towed under the previous system.