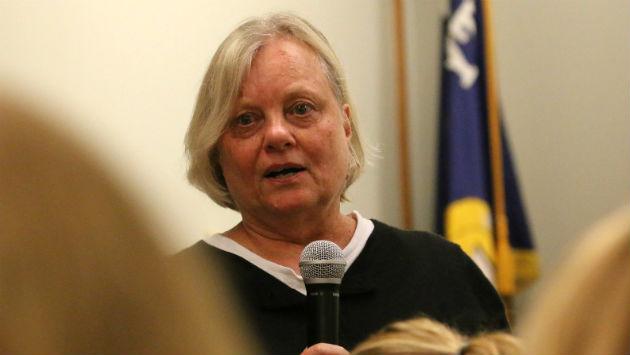 “I think we’ve done enough residential high-rise development,” Fiske said to applause from the crowd of about 50 people.

Barbara Janes of 812 Colfax St. said the city should impose a moratorium on transit-oriented development, “until we find out whether the ones we’ve gotten built have accomplished what they’re designed to do.”

None of the speakers at the meeting had anything good to say about any building built downtown in the last half century, although Fiske did say she liked the park-like setting of the Sherman Gardens co-ops, which building residents said were constructed in 1946.

The city’s newly-appointed community development director, Johanna Leonard, said the newly-elected City Council is scheduled to set its goals at a meeting on June 19 and then decide what — if anything — to do about the Downtown Plan a week later on June 26.

Leonard, who as a Plan Commission member a decade ago was involved in developing the current plan, noted that the zoning changes the plan proposed have never been adopted.

The City Council elected in 2005 decided the 1989 downtown plan had become outdated and launched the process to develop a new one in the midst of a building boom in 2006.

The plan itself was adopted in February 2009, just before the next City Council election, and work began to implement the related zoning changes, but that work was put on hold a few months later.

Leonard said she’s not entirely sure why that happened, but, “We had a recession, and one of the Councils’s goals became economic development.”

“Where we’re at now,” she added, “is that we’re hearing a lot of feedback that we should revisit some of those things.”

Fiske said that in addition to already-announced development proposals downtown, she’s been in discussion with the owners of The Merion at 1611 Chicago Ave. who want to do a project on property they own just to the north at 1621-1631 Chicago Ave.

The one-story building on that site houses storefronts that run from Kafein at the south to Found at the north.

“The downtown plan would call for six stories there,” Fiske said, “and the current zoning code would allow 18 stories,” Fiske said, “but the developer wants 34 stories.”

“You need to show up at Plan Commission and Planning and Development Committee meetings,” Fiske added, “If were going to go and make this effort, we need to hear from all of you.”