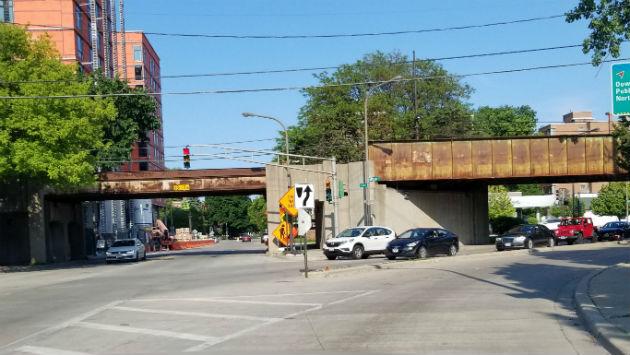 The diagonal Elgin Road was added to the city’s street grid over a half century ago, at the time Orrington Avenue was vacated between Clark Street and University Place to permit construction of Northwestern University’s Rebecca Crown Center.

Previously a driver heading west on Clark Street likely would have turned north on Sherman and then west onto Emerson to exit the downtown area.

And northbound traffic on Orrington Avenue would have had access to Sheridan Road via University Place.

A staff memo says a pilot closure of Elgin, potentially for four weeks during July and August, would explore “the potential benefits of restoring the original street grid system at the northern edge of the downtown business district.”

In reality, closing Elgin would only partially restore the original grid, because the closures of Orrington and University Place would be unchanged.

Looking northwest at the traffic islands at the intersection of Clark, Orrington and Elgin. (Google Maps)

Given the presence of landscaped traffic islands at the intersection of Clark Street with Orrington Avenue and Elgin Road, it appears from the staff memo that westbound traffic on Clark would face a dead end at Orrington during the proposed test closure.

Another issue with the proposal is that the Emerson Street viaduct under the CTA tracks lacks sufficient clearance for 13-foot-6-inch tall semi-trailer trucks.

The staff memo says that could be addressed by leaving the Emerson to Benson segment of Elgin Road open for semi-trucks, by creating a temporary truck route on Maple Avenue and Foster Street or by redirecting semi-trailer traffic onto Chicago Avenue.

City Manager Wally Bobkiewicz this morning says tonight’s planned discussion of closing Elgin Road was prompted by a detailed conceptual plan from a former Evanston resident who suggested that, in addition to providing various improvements for pedestrians and bicylists, closing Elgin Road could also free up land that could become the site for a new Civic Center.