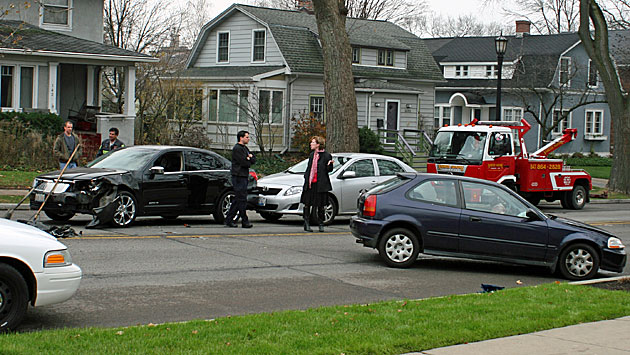 Update 9:15 a.m.: A five-car accident on Dempster Street just west of Wesley Avenue that happened around 8:30 this morning left one driver with what are described as non-life-threatening injuries.

Evanston Police Cmdr. Jay Parrott says the accident occurred when a car headed northbound on Wesley crossed into the path of a car driving westbound on Dempster.

The second car, Parrott says, went out of control because of the impact, striking the other vehicles.

Several police and fire units were on the scene and one person was transported to St. Francis Hospital by paramedics.

Parrott says it's expected that the northbound driver will be issued a traffic citation for failure to yield the right of way.

Dempster was blocked by the accident from Asbury to Ashland avenues and Wesley from Wilder to Greenwood streets for part of the morning rush hour.

Top: Three of the five cars involved in the crash on Dempster this morning.