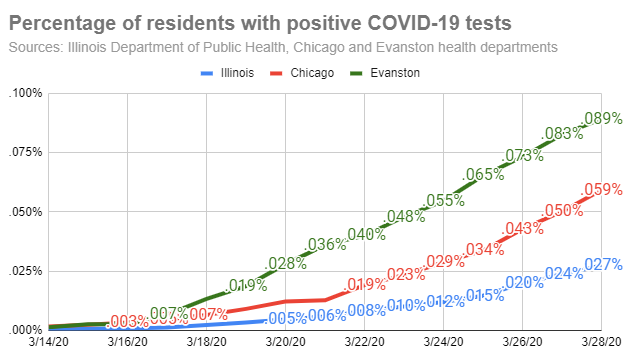 Evanston officials announced five new confirmed cases of COVID-19 in the city today, raising the total to 67, while state officials said the count across Illinois grew by 465 to 3491.

There were 13 additional deaths across the state for a total of 47. Today’s victims included an infant.

Illinois Department of Health Director Ngozi Ezike said it’s believed to be the first time an infant’s death has been associated with the novel coronavirus and that a full investigation is underway to determine the exact cause of death.

In Skokie, officials reported 10 new cases, for a total of 66. Just over one in every thousand Skokie residents has now been confirmed to have the disease, while in Evanston the rate is slightly lower, at 0.089%

At his news conference this afternoon, Gov. J.B. Pritzker expressed sorrow for the death of the infant and the other COVID-19 victims.

But one week after issuing his stay-at-home order, he said the drastic measures the state has implemented to slow the spread of the disease are the right course of action.

He noted the plans to turn Chicago’s McCormick Place convention center into a field hospital that could care for as many as 3,000 COVID-19 patients and said, “We are not waiting for the worst to happen, we are preapring ourselves for the worst.”