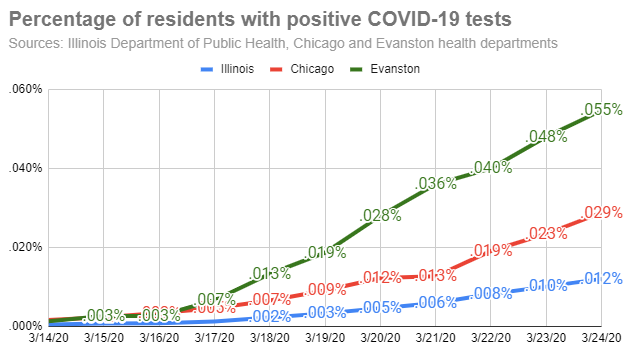 COVID-19 cases continued to grow today with 235 new cases reported across Illinois, including five in Evanston.

In Evanston, with 41 confirmed cases now reported, about one in every 1,825 residents is known to have the disease — or 0.055% of the population.

That’s nearly twice the rate in Chicago and more than four times the rate across Illinois as a whole.

Skokie’s confirmed COVID-19 case count rose by five to 28 today, giving it an infection rate of 0.044%. Skokie today also reported its first death from the pandemic. Health officials there described the victim as an older man with underlying health conditions.

At a news conference this afternoon, Gov. J.B. Pritzker said there’s now capacity to do more than 2,000 COVID-19 tests a day in the state, up from about 50 a day in February, and he hopes to be able to more than double current testing capacity “in the relatively near future.”

“We’ve got to do more testing,” Pritzker said, to get an accurate picture of the extent of the pandemic’s spread across Illinois.

Illinois Department of Public Health Director Dr. Ngozi Ezike said all but one of the people who have died from the novel coronavirus in Illinois so far have been more than 60 years old.

She said the latest victims were a Chicago man in his 50s, two suburban Cook County residents in their 60s and a DuPage county woman in her 90s.

Ezike said that for all confirmed cases of COVID-19 identified so far, roughly 54% of the victims are white, 33% black, 5% Asian and 11% Hispanic.

Evanston’s COVID-19 infection rate, while high for Illinois, is still considerably lower than in the nation’s worst hot-spot. As of yesterday 0.173% of New York City residents had tested positive for COVID-19, or nearly one in every 600 people.