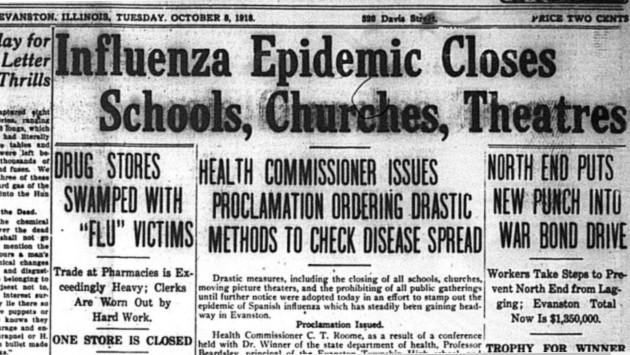 As World War I was nearing its end in 1918, Evanston — like the rest of America — faced an influenza epidemic that has some striking resemblances to the COVID-19 coronavirus pandemic being dealt with today.

As businesses are being closed and people are being told to practice social distancing today, officials resorted to trying to keep people from mingling back then.

Drastic measures, including the closing of all schools, churches, moving picture theaters, and the prohibiting of all public gatherings until further notice were adopted today in an effort to stamp out the epidemic of Spanish influenza which has steadily been gaining headway in Evanston.

Health Commissioner C.T. Roome, as a result of a conference held with Dr. Winner of the state department of health, Professor Beardsley, principal of the Evanston Township High school, and Professor Nichols, superintendent of school districts 75 and 76, has issued the proclamation which puts an end to all public activities until the epidemic is under control.

Children sixteen years of age and under must remain on their own premises unless by special permission of the department of health. Barbers must wear a gauze mask covering the nose and mouth while serving their customers. Clerks in stores, factories, etc., who are coughing or sneezing, or show symptoms of acute colds must be sent home at once. Proprietors will be held responsible for the enforcement of this regulation.

Special precautions must be taken in hotels, restaurants, ice cream parlors, etc., in properly sterilizing all dishes after using. All persons, especially when in cars, stores or public buildings, if obliged to cough of sneeze, must hold their handkerchiefs over their faces. Spitting in street cars, on sidewalks and other public places is absolutely prohibited.

All departments of the Y.M.C.A. except the dormitories have been closed and all social programs cancelled.

It became noticeable yesterday morning that the epidemic is decidedly on the increase in Evanston. There were 200 cases reported Sunday, as against only 150 on Saturday. Since September 23 there have been twenty-five deaths of influenza. The proportion of cases among children has increased markedly in the last five days, all this in spite of every effort of the health department, assisted by representatives from the state department of health.

The closing order affects schools, including Sunday schools, churches, theaters and all public gatherings. Funerals from churches are prohibited, and must be henceforth private or semi-private.

In 1918 responses — and fatality rates — varied greatly across the country. A 2007 research study compared what had happened in Philadelphia and St. Louis.

In Philadelphia there was a two-and-a-half week delay between the first report of Spanish Flu among civilians and the imposition of school closures and other social distancing measures.

By the time the epidemic was over, Philadelphia had experienced a death rate from pneumonia and influenza more than twice as high as the rate in St. Louis.

More on that study and the effectiveness of social distancing in this story from Quartz.

You can learn more online about the 1918 epidemic in Evanston by searching for “Spanish Flu” in the Evanston History Center Historic Newspaper Collection.