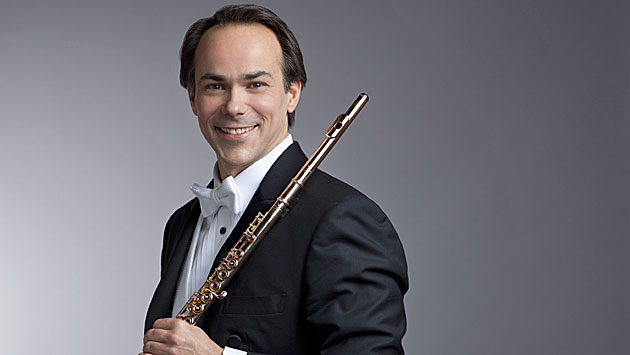 The concert will be held on Mother’s Day Sunday, May 13, at Pick-Staiger Concert Hall in Evanston at 2:30 p.m.

Conducted by Music Director Lawrence Eckerling, the program consists of three works presented in orchestral adaptations of their original versions.

Dufour will perform Mozart’s Second Flute Concerto in D Major, which Mozart himself transcribed from his own Oboe Concerto in C Major.

The concert opens with Johann Sebastian Bach’s Toccata and Fugue in D Minor.  This organ composition was orchestrated by Leopold Stokowski and became the music that opened Walt Disney’s “Fantasia”.

While Stokowski was not the first nor the last to orchestrate Bach’s famous piece, his has become the most frequently performed and recorded version.

The orchestration by Arnold Schoenberg of Johannes Brahms’ popular First Piano Quartet will close the concert. The tuneful “Gypsy Rondo” finale in this colorful version for a large orchestra will provide a dazzling conclusion to the season.

Tickets are priced at $27 for adults, $22 for seniors, $5 for full-time students and free for children 12 and under when accompanied by an adult.

Tickets are available on-line at www.evanstonsymphony.org or by calling 847.864.8804.

Tickets can also be purchased at the box office on the day of the concert at $30 for adults and $25 for seniors, with the prices for student and child tickets unchanged.

Founded in 1945, the Evanston Symphony was the Illinois Council of Orchestra’s “Orchestra of the Year” for 2010.

The ESO offers five concerts a year with a mission to provide community members of all ages with convenient, affordable opportunities to perform and hear fine classical music from locally, nationally and internationally renowned artists.