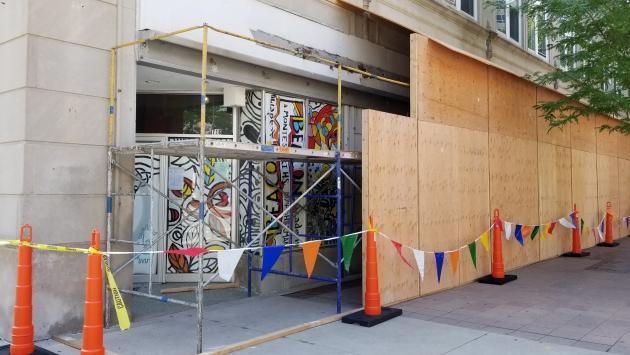 The boards went up covering the facade of old Radio Shack store in downtown Evanston this week as Milwaukee-based Colectivo Coffee got its remodeling work underway.

The company, which has 15 shops in the Milwaukee area, three in Madison, Wisconsin, and two on Chicago’s north side, serves coffee, tea and espresso drinks along with smoothies and beer.

The shop will also feature baked goods and sandwiches and is expected to operate from 6 a.m. to as late as 11 p.m.

In approving the plans last December, members of the city’s Zoning Board of Appeals said they’re convinced there’s lots of demand for another coffee shop in town, given how busy the existing ones are.

Meanwhile, Adam Paronto is scheduled to seek approval from the ZBA tonight for his plans to open yet another coffee shop, Reprise Coffee Roasters, at 710 Main St.

The floor plan for Reprise.

The site is a now-vacant storefront just west of Trattoria D.O.C.

Paronto plans to open about 6 a.m. and close by 7 p.m. each day and says he’ll be buying his coffee from Gold Mountain Coffee Growers, a direct trade coffee wholesaler in Nicaragua.

And, in another nibble on the food beat, the city received a food establishment license application last week to re-open the property at 817 University Place that formerly was the Las Palmas Mexican restaurant. Plans call for sticking with a Mexican cuisine theme but under a new, yet-to-be-determined name.