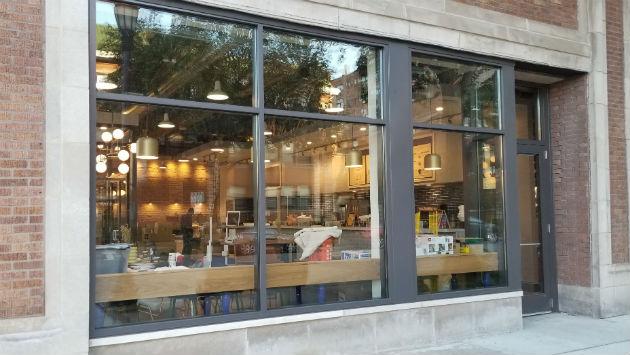 Workers were busy inside the new Philz Coffee location at 1030 Davis St. in Evanston this morning, getting the shop ready for an opening early next month.

The San Francisco-based chain is taking over front portion of the former Studio Media space at the corner of Davis and Oak Avenue after an extensive renovation by the building’s owners, who also own the Lulu’s, Taco Diablo and Five & Dime restaurants next door at 1026 Davis.

Speaking of things Evanston has in common with Hyde Park — there’s the new location here of Eric Rico Nance‘s Litehouse Whole Food Grill, which got its start nearly seven years ago in the south side neighborhood.

Nance has announced a grand opening celebration for next Monday, Sept. 30, at the new location in the City of Evanston’s Gibbs Morrison Cultural Center at 1823 Church St.

If you’re still trying to get over the closing of Cheesie’s Pub and Grub — the mac and cheese focused restaurant downtown that closed the middle of last year, you may be interested to know that  I Heart Mac & Cheese, a Florida-based fast casual chain, today announced the signing of a deal with a franchisee, Soyo Group, to open several outposts in Illinois, including one in Evanston, sometime next year. No word yet on a specific location here.

The press release says the restaurant specializes in “customizable, made-to-order macaroni and cheese bowls with a variety of health-conscious bases including quinoa, broccoli, cauliflower, and gluten free pasta and grilled cheese sandwiches.”

And if all that food has you packing on the pounds, there’s a new gym in town, Blink Fitness, which opened last Friday at 1926 Dempster St. in the Evanston Plaza shopping center.