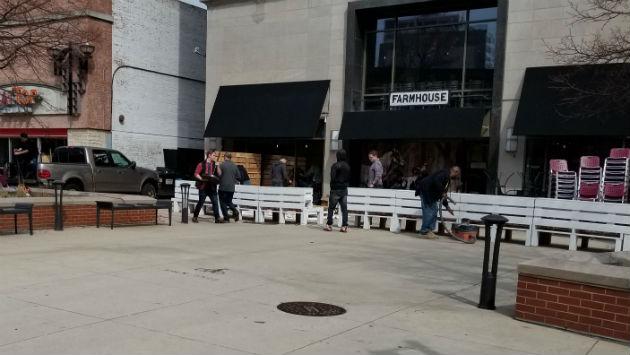 Workers were returning the sidewalk cafe furniture Saturday to the Church Street walkway outside the Farmhouse restaurant in downtown Evanston, just one sign that al fresco dining will return to the city soon.

Another sign — aldermen are scheduled Monday night to approve renewal of the Krave Concession LLC contract to run the Arrington Lagoon and Clark Street beach food and drink stand and mobile concessions at the city’s other beaches this summer.

The City Council is also scheduled to approve new liquor licenses for the Halim Time and Glass Museum‘s banquet hall at 1560 Oak Ave. and for Eurest Dining Services in the Rotary International building at 1560 Sherman Ave.

And owners of the proposed Palmhouse event space at 619 Howard St. will get a second hearing before the Design and Project Review Committee Wednesday — providing more details of ther plans to answer questions that led the committee to hold off on an approval vote last week.

They owners now say they’ve lined up off-street and valet parking arrangements for the facility, will imite operating hours to 8 a.m. to 11 p.m. Sunday through Thursday and 9 a.m. to midnight on Friday and Saturday. They also plan to make several upgrades to the building to assure that sound levels from the building don’t exceed the limits in the city’s noise ordinance.

Also on DAPR’s agenda approval of a building permit for the planned Double Clutch Brewery at 2121 Ashland Ave. Zoning changes for that project were approved last fall.