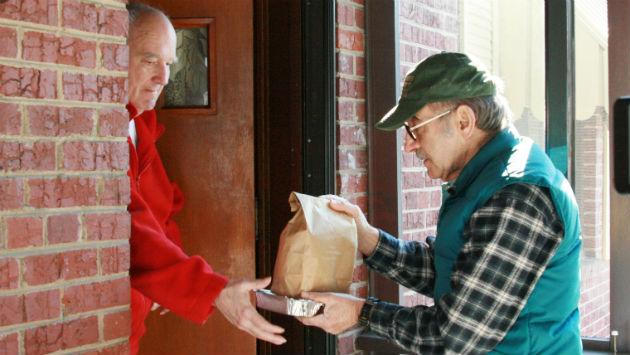 The Evanston-based food delivery agency Meals at Home is rebranding itself with a new name and planning a major expansion.

“Everyone knows the Meals on Wheels name” from its use elsewhere around the country, Genthe says, “so we’ve decided to go with the name people know and trust.”

Meals at Home has gradually grown to serve about 250 people each year, and has over 400 volunteers making deliveries of two meals a day — one hot and one cold — to elderly and disabled residents from Evanston north to the Illinois state line.

Genthe says the service area is mostly east of I-94, but that it has also expanded to take on a program serving Glenview and Northbrook, so it now extends its service area west to I-294 between Golf and Lake Cook roads.

She estimates the potential need in the delivery area at over 10,000 people who are largely homebound and could benefit from the food delivery service. The basic fee for the service is $12 a day, but with sliding-scale discounts based on the client’s income. About 60 percent of the clients receive a discount, she says.

Genthe says the organization is planning to launch its own commercial kitchen, which hopefully will be in operation by Jan. 1.

With the new food production facility, “the sky’s the limit in terms of quantities” that could be produced, she says, and she hopes the number of clients served will double in the first two years the kitchen is in operation.

And the kitchen is expected to be able to provide more choice of foods to clients and allow the agency to provide more fresh local ingrediants and more colorful meals as well as better meet special dietary needs and preferences.

She says plans are to locate the kitchen in Evanston, although site hasn’t yet been announced, and that the group has hired Nell Funk of the Evanston food business incubator Now We’re Cookin’ to help orchestrate the process of getting the kitchen up and running.

Until now the agency has relied on hospital kitchens and local restaurants to prepare food for delivery.

The fees from clients don’t cover all the agency’s costs, Genthe says, and it continues to seek support from individual donors as well as from foundations. She said the Retirement Research Foundation  provided a grant a month ago that will cover the cost of a new software program to track food deliveries and let volunteers automatically report on client needs.

She says that extra touch is one way in which Meals on Wheels does more than what the pizza delivery guy could do.

“There’s also a little visit going on. Clients and volunteers get to know each other after a while. The volunteer may be the only person the client sees that day, and if the volunteer notices a decline in the client’s condition, they can call the office and we can connect the client with people who can help.”