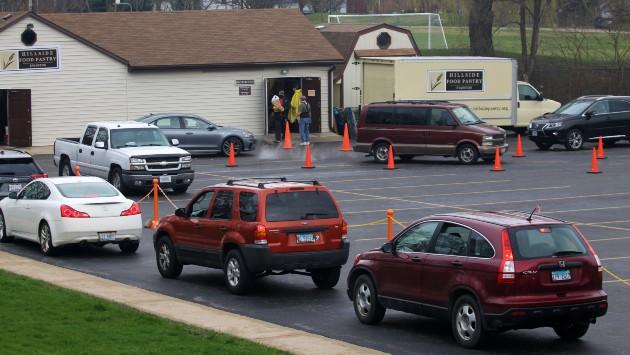 The federal government today reported that nearly 201,000 more Illinois residents made initial claims for unemployment benefits last week as the COVID-19 crisis unfolds, and —  no coincidence — the Hillside Food Pantry in Evanston had a long line of customers Wednesday.

Operations Manager Faith Albano says the pantry received about 16,000 pounds of food from The Greater Chicago Food Depository — nearly four times its normal Wednesday delivery — and was able to quickly recruit about 20 volunteers to help get the food stocked and ready for distribution.

With the ample supply of food, the pantry was able to double its usual distribution amount — offering each patron who arrived two bags of groceries instead of the normal single bag.

Albano says cars of people waiting for the food backed up on Crawford Avenue. “We have not had this much backup,” she says, “since the economy crashed way back when we first opened in 2009.”

With the economy doing so much better the last few years, the numbers decreased, but “with this virus and the economy shut down for the time being, people are finding themselves in desperate need,” Albano added

Much of the backup Wednesday, she says, stemmed from a need to revise the registration and check-in system to deal with the influx of new customers.

She says the pantry served 207 families Wednesday, 33 of whom were making their first visit. Albano says the pantry has no geographic or income limits — anyone can come to the pantry who is in need of food.

The Hillside Food Pantry, at 2727 Crawford Ave., will be closed this Saturday for the Easter holiday, but its regular hours are 4 to 6 p.m. on Wednesdays and 2 to 4 p.m. on Saturdays.