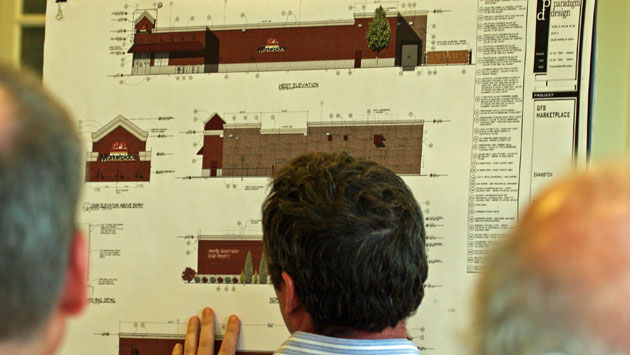 A proposal for a new food store on Oakton Street, which seemed to have died months ago amid a dispute over environmental rules, is back — wining preliminary approval from a city committee today.

The proposed Gordon Food Service Marketplace story would be built on land at 2424 Oakton St.

In late February the City Council adopted amendments to its Green Building Ordinance requiring new commercial buildings between 10,000 and 20,000 square feet in size to achieve LEED silver standards or meet a set of locally-developed environmental standards.

Gordon's officials said then that it couldn't afford to meet those rules.

Today the company presented plans for the building to the city's Site Plan and Appearance Review Committee. 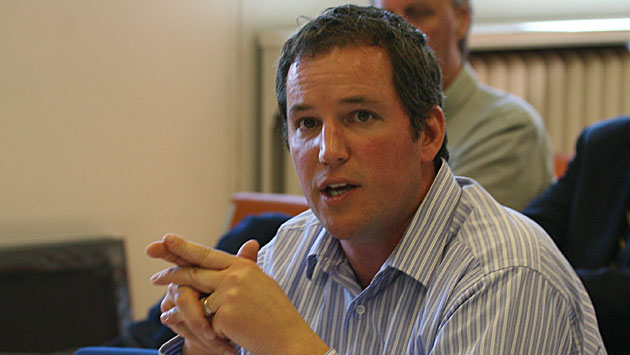 Bill Casey of Gordons. Top: Casey shows the audience at the meeting elevation drawings of the planned store.

Casey said Gordon's is a privately held family-owned company and that the store will be open from 8 a.m. to 8 p.m. Monday through Saturday and from noon to 8 p.m. on Sunday.

He said the company, which primarily is a wholesale supplier to the restaurant industry views its expanding chain of retail stores as a place where consumers might shop once a month for "pantry stuffers and party supplies."

It's not a replacement for the supermarket, he said.

Members of the committee discussed landscaping, parking, sidewalks and handicapped access to the site before voting unanimously to give it preliminary approval.

There was no discussion of the energy efficiency and cost concerns that had stalled the project in the past.

Of three city officals Evanston Now contacted for comment after the meeting, one was not familiar with the project, another was out of town and could not be reached, and a third did not immediately return a reporter's phone call.