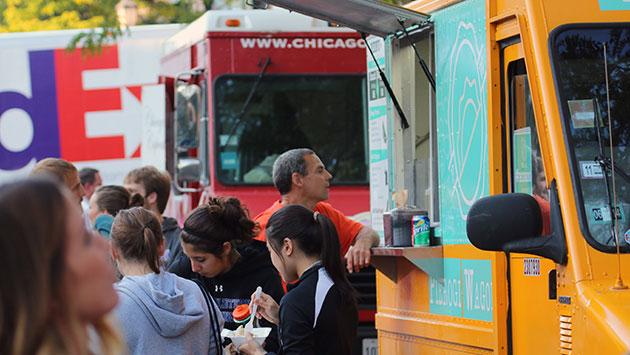 Evanston aldermen made a tentative step this week toward loosening city regulations that choke off most food truck operations in Evanston.

At Monday's Human Services Committee meeting Alderman Judy Fiske, 1st Ward, repeated a long list of objections to the trucks that she said had been sent to her by a local restaurateur.

No restaurant owners appeared at the committee meeting to oppose the trucks, but she said owners of bricks-and-mortar restaurants are reluctant to stand up publicly and oppose something that appears to be popular among residents.

She said the restaurant owner who contacted her was concerned about fairness in licensing fees, the city requirement that requires carry out restaurants to go through the special use permit approval process as well as exhaust, ventilation, fire suppression, idling, disturbances and other issues.

"I'd like us to make sure to address those concerns," Fiske said, although she later added "food trucks are very popular, and that's wonderful."

The city has, on a limited basis, permitted food trucks to operate at special events in town, but for any regular daily operation it now requires that the food truck owner also own a bricks-and-mortar restaurant in the city.

That restriction has been the subject of a long-running lawsuit, and Jacob Huebert, the attorney for the food truck operators who filed the suit, told the committee he "greatly appreciates the effort to open up the market in Evanston."

But Huebert, of the Liberty Justice Center, said a proposal being considered by city staff, to require that food trucks have air curtains — like some traditional restaurants that open their windows in the warmer months — would be an unnecessary expense.

"They don't actually serve any purpose beyond that served by regular screens, Huebert said, adding that the City of Chicago doesn't require air curtains in food trucks licensed there.

Fiske also expressed concerns about whether permitting food trucks along the lakefront would create unfair competition for the concessionaire who has a city license to operate there.

Assistant City Manager Marty Lyons said the lakefront concession contract will be up for bids again next year and that the future of that program is one of many issues to be addressed in developing revisions to the food truck ordinance.

Alderman Delores Holmes, 5th Ward, said it was clear from the popularity of food trucks at summer concerts in her ward that people do want to have the trucks, but she said it's important that the city charge fees to the truck operators that will cover the costs of inspections.

Lyons said he hoped to have an update for the committee for its next meeting, on Monday, June 6. He suggested the staff might initially tackle new rules for special events this summer and then address year-round operational issues, perhaps with a pilot program next year.