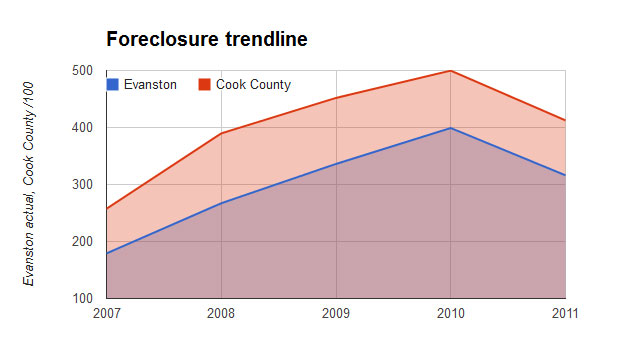 A new report from the Woodstock Institute says foreclosure filings in Evanston dropped last year — the first year-over-year decline since before the foreclosure crisis began.

The decrease in Evanston, nearly 21 percent, was slightly greater than the 17 percent decline recorded for Cook County as a whole.

In addition, the number of properties being sold at foreclosure auctions in Evanston declined from 134 in 2010 to 86 in 2011.

The Woodstock Institute report says it's not clear whether the declines represent a true drop in the number of distressed properties — or is the effect of procedural delays in the system making it less attractive for mortgage lenders to file foreclosure actions.

In addition, the report says, some lenders may be less willing to take on responsibility for actually owning more properties in a distressed market where they may have difficulty reselling them.