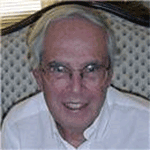 Dr. Lyons, an anesthesiologist who practiced at St. Francis Hospital in Evanston for part of his career, died on Dec. 30 at age 92 at The Mather in Evanston.

He had served as alderman from 1965 to 1971. In honoring him in 2013 with an honorary street sign for Austin Street between Asbury and Barton avenues the City Council adopted a resolution that described him has having been "the conscience" of the council and noting that he was instrumental in codifying open and fair housing practices in the city.

Born in Buffalo, N.Y., on Jan. 29, 1922, he received undergraduate and medical degrees from the University of Buffalo.

He and his wife, the late Miriam (Gotthelf) Lyons, moved to Evanston in 1956 and raised their four children here.

In lieu of flowers, donations may be made to Doctors without Borders or to the Parkinson’s Disease Foundation. The memorial service is scheduled for 11 a.m. Jan. 18, at The Mather, 425 Davis St.