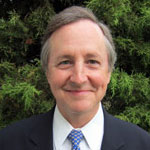 Rowley worked for 30 years for the Chicago Tribune and for the past two years has been executive director of government and community relations at Elmhurst College.

Cubbage said that at the college Rowley helped organize a new two-year partnership between the college and the Pulitzer Center on Crisis Reporting in Washington, D.C., to promote journalism skills, teach new media strategies and fund foreign correspondents in underreported areas of the world. He also helped plan and stage an Illinois gubernatorial debate at Elmhurst College last year.

At the Tribune Rowley served stints as the paper's national editor and as a member of the editorial board.

He also was a foreign correspondent, covering, at various points in his career, Latin America, Canada and the Middle East. He also covered the White House and the Pentagon for the Tribune.

Rowley is an honors graduate of Harvard College.