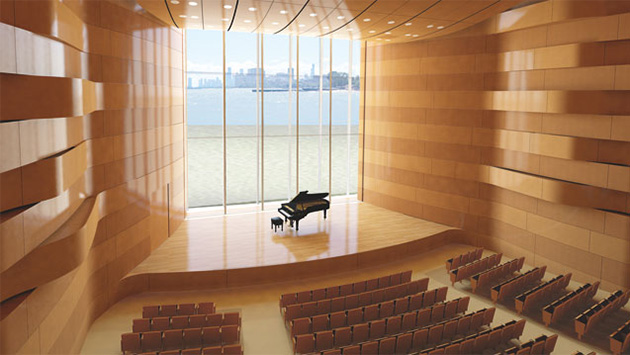 The Robert W. Galvin Foundation has made a $6 million gift in honor of Mary B. Galvin, a 1945 graduate of Northwestern University, in support of Northwestern’s Henry and Leigh Bienen School of Music.

In recognition of the significant gift, Northwestern will name the recital hall in a new Music and Communication Building under construction on the Evanston campus the Mary B. Galvin Recital Hall.

The 400-seat recital hall will be the premier showcase for music performances in the new building and will feature a 50-foot-high glass wall behind the stage, framing dramatic views of Lake Michigan and the Chicago skyline.

The new building will be located on the lakefront at the south end of Northwestern’s Evanston campus. The signature building, designed by the distinguished architectural firm Goettsch Partners, will be the new home for the Bienen School of Music. It also will provide space for the School of Communication.

The Mary B. Galvin Recital Hall will be the site of student, faculty and guest artist performances, along with other University events. Kirkegaard Associates, the acoustical design firm that created the acoustics for Northwestern’s Pick-Staiger Hall, will design the acoustics for the new hall. In addition, the hall will feature state-of-the-art video and sound equipment for recording performances.

“The recital hall will be the centerpiece of our new building,” said Toni-Marie Montgomery, dean of the Bienen School of Music.

“Mrs. Galvin’s role as co-founder of the Stradivari Society, which has provided valuable and prestigious string instruments to world-class musicians such as Midori, Joshua Bell and Gil Shaham, makes the naming of this venue particularly meaningful. Mary studied violin as a child, and her love of music and understanding of the importance of early musical training is exemplified through her patronage of the Magical Strings of Youth program. Mrs. Galvin has made a significant impact on the careers of musicians worldwide. The Mary B. Galvin Recital Hall will serve as a source of inspiration and great pride for Bienen School students and faculty.

“We are extremely grateful for the support of the Galvin family and the Galvin Foundation, and we look forward to the gala opening of the Mary B. Galvin Recital Hall in 2015," Dean Montgomery added.

The Galvin family has long-standing connections to Northwestern. Robert W. Galvin, the former chairman and CEO of Motorola Inc., who died in 2011, received an honorary degree from Northwestern in 1992.

His wife, Mary B. Galvin, received an undergraduate degree in communication from Northwestern in 1945.

Christopher B. Galvin, who succeeded his father, Robert, as chairman and CEO at Motorola and who is a member of Northwestern’s Board of Trustees and the Dean’s Advisory Board of the Kellogg School of Management, received an undergraduate degree from Northwestern’s Weinberg College of Arts and Sciences in 1973 and an MBA with distinction from Kellogg in 1977.

“The entire Galvin family is pleased to honor our mother and grandmother for her passionate contributions to the arts throughout the world over the past five decades and to support Northwestern’s outstanding music and communication programs,” said Chris Galvin.

“This new building will be an important addition to the Northwestern campus,” said Northwestern President Morton Schapiro. “The building aligns with the goals of our strategic plan to offer the Northwestern community and residents of Evanston and surrounding areas an array of educational and cultural opportunities. I’ve had the pleasure of getting to know Mary Galvin in the past few years and, given her love of music, it’s very appropriate that we are naming the music recital hall in her honor.”

Construction on the new Music and Communication Building began in June 2012 and is expected to be completed in fall 2015.

In addition to the Mary B. Galvin Recital Hall, the building will include the Carol and David McClintock Choral Rehearsal/Recital Room and an opera rehearsal room/black box theater.

The building design emphasizes a sustainable approach throughout, with a minimum goal of achieving LEED Silver certification from the U.S. Green Building Council.

The project will also include a new arts green to the west of the building that will consist of a 120-foot-wide, pedestrian-friendly green space. This dramatic gateway to the new building and the fine arts area will provide a major open space amenity that can become a focal point for special events and recreation.

The green space will improve pedestrian safety while still allowing vehicular access to the current buildings.