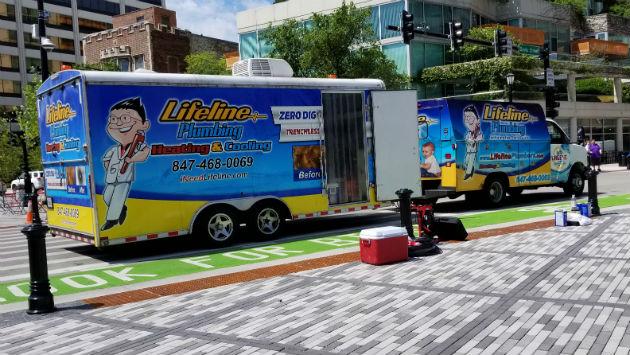 That plumbing repair truck you may have noticed in Fountain Square in downtown Evanston in recent days has been deployed to fix leaks in the new fountain being installed in the square.

City Engineer Lara Biggs says Copenhaver Construction, the contractor on the Fountain Square project, didn’t perform pressure testing on underground piping for the fountain before covering up the work.

So when leaks were discovered, it had to bring in a company that specializes in lining leaky pipes to make the repairs.

Biggs says the lining process is being performed at Copenhaver’s expense and is scheduled to be completed next week.

Glass panels for the veterans memorial at the square were damaged during transit and replacements were delivered this week, Biggs says, although there’s still an issue with one of the panels and so it may not be installed for another two to three weeks.

She says the city’s not responsible for any additional costs for the replacement of the panels.

If there’s good news amid the delays, Biggs says, it’s that the overall cost of the project to the city is still coming in at a lower amount than the original contract award.

Copenhaver has been assessed liquidated damages totaling $64,125 for failing to complete work in the south plaza by last Dec. 1.

Work on the north plaza was to have been completed by May 20. Biggs say liquidated damages in the amount of $1,425 per day began being assessed against Copenhaver the next day and will continue until the work is substantially completed.

She says the city has encountered additional engineering costs because of the delays. A change order for $197,906.80 covering those costs through May 20 was approved by the City Council in January.

The liquidated damages help offset some of that cost and the construction work, Biggs says, is actually coming in under budget by about $400,000.

If the pipe repairs are completed next week, startup and testing of the fountain is scheduled for the week of July 30.