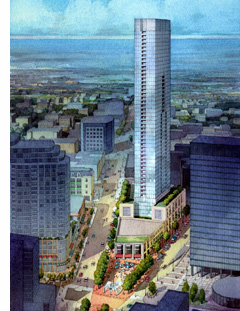 The developers of Sherman Plaza today unveiled a rendering of what they hope will happen across the street on the Fountain Square block in Evanston.

Developers Tim Anderson and James Klutznick say they want to replace the two-story 708 Church St. building at the north end of the block with a 49-story condominium tower that would have two floors of retail and three levels of parking at the base.

They also propose that the city use incremental tax revenue from the tower to pay for acquisition of the seven-story Fountain Square building at the south end of the block and redeveloping that site with an expanded plaza and a smaller retail building that likely would house a restaurant.

The landmarked three-story Hahn building at mid-block would be untouched by the development proposal.

The current incarnation of Fountain Square was built as a bicentennial project in the 1970s and now suffers from decaying masonry and fountains that work only sometimes.

The city's latest capital plan estimates the rebuilding cost for the plaza at $4 million — with no funding source identified to pay for it.

Mr. Anderson said that when the developers met with the City Council in executive session recently to discuss the implications of the project for the city-owned plaza, the aldermen indicated they wanted the city to be in charge of the plaza project.

"This can be the financial engine to support acquisition of the Fountain Square building to expand the plaza and make an outdoor living room for downtown Evanston," Mr. Anderson said.

He said same tax increment financing district covers both Sherman Plaza and the Fountain Square block. "That TIF ends in 2018. This project would probably be up by 2010 or so. That means there's only eight years of increment revenue available. So if the city waits five years to do this, the increment won't be there to do Fountain Square. There's just a short window of opportunity," he added.

The developers say they hope to begin the formal review process for the project before the city's Plan Commission in June and, assuming they get needed approvals, start construction late next year.