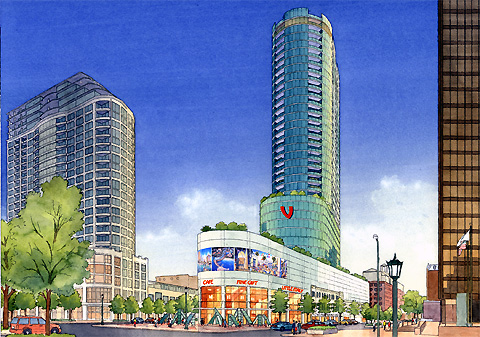 Developer Thomas Roszak says his proposal for a 38-story hotel and condo tower on the Fountain Square block would preserve the facade of the landmark Hahn Building at mid-block but replace everything else on the site.

A rendering of the Roszak/ADC Fountain Square tower proposal.

Mr. Roszak says preliminary plans for the project call for two levels of underground parking plus five parking levels above ground, an eight-story hotel above that, and 288 condo units in a more slender tower above the hotel.

The project would also include 50,000 square feet of retail space.

He says the 192 hotel units would be sold as condos, but with a major hotel chain renting them out when they are not occupied by the owners.

It would be the only condo hotel on the North Shore, Mr. Roszak said, â€œThere’s a big desire for that type of product now. It provides an alternative lifestyle for people who have been living on the North Shore and perhaps now want to move to Miami or Scottsdale, but still want to have a place here.â€

An observation deck and restaurant would top the building. â€œIt would be kind of a tourist attraction,â€ Mr. Roszak said, â€œthe only place in town where people can go and have dinner at that height.â€

â€œI’ve had a couple of very preliminary meetings with some of the people in city hall, and with the alderman, and at first they’ve been taken aback by the height, but they seem to have liked the design,â€ Mr. Roszak said, â€œThat doesn’t mean they’ve approved it or anything â€“ these were just preliminary meetings and we have a long haul in front of us.â€

Assistant City Manager Judith Aiello told aldermen at Monday night’s Rules Committee meeting that she and City Manager Julia Carroll had met with Mr. Roszak, but that his initial proposal was “DOA” — dead on arrival.

Alderman Cheryl Wollin, in whose 1st Ward the site is located, said that since Mr. Roszak doesn’t yet have ownership of the three parcels involved, it would be premature for her to comment on the project.

Mr. Roszak says he is in continuing negotiations with the current land owners.

Alderman Ann Rainey, 8th Ward, said, â€œIf there are tall buildings in Evanston, the heart of town is where they should be.â€ She said she wasn’t sure how tall a project should be allowed on the site, but added that the city has a shortage of hotel rooms.

Mr. Roszak said the project, on the triangular block bounded by Orrington and Sherman Avenues and Church and Davis Streets, would also provide for renewal of the fountain and war memorial in the square, which have fallen into disrepair. 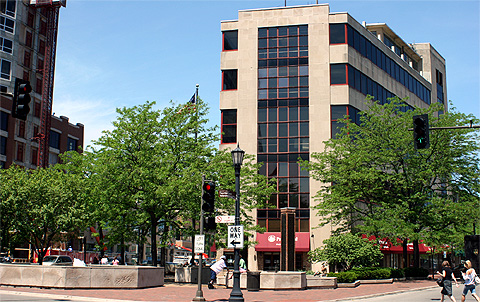 â€œWe’re considering having an artist design an interactive memorial sculpture that people could sit on and play on, but still be respectful to the purpose of the memorial,â€ he said.

The project would also include a variety of green building elements, including the use of trees atop the retail and parking structure to provide an above-ground plaza for hotel patrons.

The entire Fountain Square block is zoned D2, or downtown retail core district, which permits a maximum height for planned developments including allowances of 125 feet.

However it is flanked by blocks to the east and west that are zoned D3, or downtown core district, which permit a maximum height for planned developments of up to 220 feet.

Those blocks contain the Chase Building, Evanston’s first skyscraper and its tallest at 22 stories and 277 feet high, and its newest skyscraper, the 25 story, 276-foot tall Sherman Plaza development, which is nearing completion.

Mr. Roszak acknowledge that his proposal would represent a radical change from the current zoning. â€œBut that zoning was done a long time ago, it’s not really appropriate now. This block is the center of the universe in Evanston. It needs to be sized appropriately,â€ he said.

â€œAt first glance the idea of a 38-story building may be a little shocking. But once you understand the full benefit of the project and that this is the center of town, it makes sense,â€ Mr. Rozak said. â€œLand planners always dream that the center should be the tallest, and then the city slopes down from that like a wedding cake.â€

He said is project is designed with the tower at the north end of the site, to preserve views to the lake for residents of the Sherman Plaza development. â€œWe’re trying to do something slender and elegant that won’t block the views. Sherman Plaza is very massive and doesn’t have any elegance to it,â€ Mr. Roszak said. â€œThis building will be more slender and also curved so it doesn’t look as massive.â€

â€œWe’re being very sensitive to that. We think that height is better than massiveness,â€ he added.

Mr. Roszak’s firm, Roszak/ADC, is based in Evanston. Its current project here is the Sienna, a midrise development at 1100 Clark St., which originally was proposed to include a 20-story tower building.

He said he forsees a year or two spent in the zoning approval process and â€œmeeting with Evanston residents and discussing with them to make sure this is the best project it can be.â€