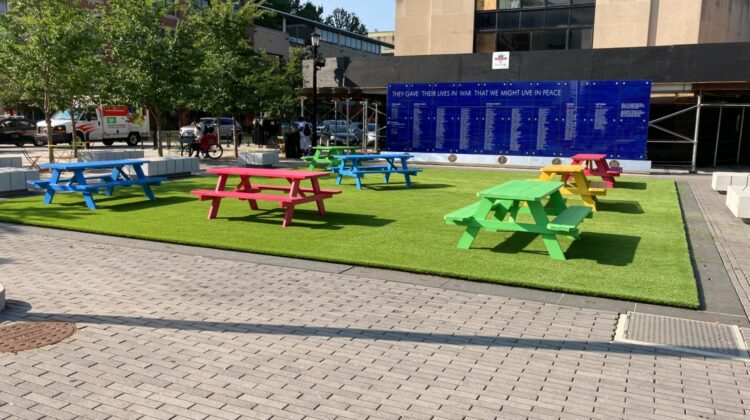 The currently-turned-off fountain at Fountain Square is now covered in green, at least temporarily.

A layer of artificial turf was installed Friday afternoon by Downtown Evanston, as well as three more colorful picnic tables to go with the four already installed at the square by the marketing organization.

Downtown Evanston’s Laura Brown (maybe now we should call her Laura Green?) came up with the turf concept.

“I have two small children,” Brown said. “It would be nice to have a space that’s more comfortable to run around on,” she added.

Cost of the turf and installation were covered by Christopher Burke Engineering, which has an office nearby on Davis Street.

On Tuesday, a “game box” will be placed at the square, with things like checkers, cards, Jenga, and Connect Four. They’re free to use. Just put them back when you’re finished.

Downtown Evanston’s executive director, Annie Coakley, says adding the games will bring a “whole ‘nother element” to the heart of downtown, which the marketing group is calling “Fun Time Square” for the duration of the good weather season.

The fountain has been turned off for repairs. The hope is it will be back in operation next year.