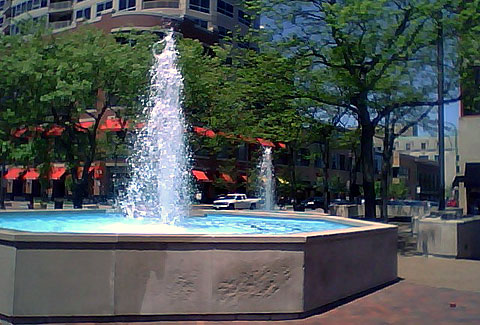 The fountains that give Fountain Square its name are back in operation this week.

The construction fencing came down and everything was working in time for Monday's Memorial Day ceremony — much to the relief of Evanston aldermen who at Tuesday night's meeting praised the contractor on the nearly half-million dollar project for getting the work done on time.

A year ago the dismal condition of the then non-functioning fountains at Memorial Day led to demands by Mayor Lorraine Morton that something be done to get them fixed — even as the city looks for funding for a total redesign of the public plaza at the intersection of Davis Street and Sherman and Orrington Avenues.

The current fountains, built as a bicentennial project in 1976, is at least the third fountain design at the intersection. The original Victorian-style fountain now lives on in the Merrick Rose Garden at Lake Street and Oak Avenue.