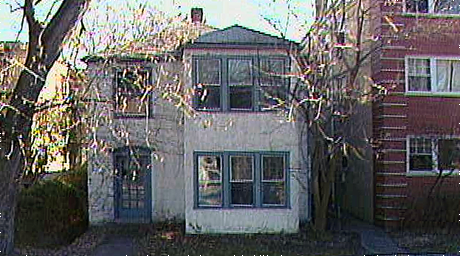 Health and Human Services Director Evonda Thomas proposed the ordinance after her staff handled complaints from residents of a condominium building at 2145-47 Ridge Ave., directly across from the Civic Center, who said their next-door neighbor was literally creating a stink by housing dozens of cats in a two-flat building.

A resident of the condo building told the committee “we couldn’t even open our windows for the cat urine smell.”

2149 Ridge Ave., and the three-story condo building whose residents complained.

She said she begin complaining to the city shortly after she bought her condo in October 2006, and it wasn’t until recently that the building owner was fined for property standards violations because of the odors, and that within the past few weeks 90 cats were removed from the residence.

Thomas said the city now limits residents to having no more than three dogs, but has no limit on the number of cats.

She said other communities in the area that the staff checked set limits of between three and five cats per household.

The proposal now goes to the full City Council for action.