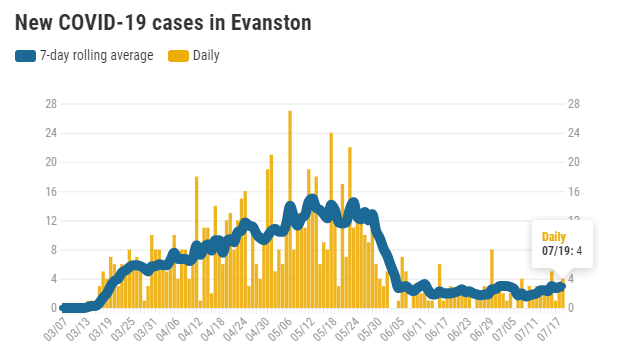 Evanston health officials late this afternoon reported that the number of COVID-19 cases among residents has risen to 838. That’s four more than had been reported by state officials yesterday.

The number of COVID-19 deaths in Evanston has remained unchanged at 71 for the past nine days.

Statewide there were 865 new cases, raising the statewide total to 161,575. The state reported five additional deaths today for a total of 7,295.

Suburban Cook County reported 195 more cases today for a total of 41,707. But the suburban Cook death toll declined by two to 2,048, presumably because persons who died and were initially reported as country residents were later determined to have lived elsewhere.

The IDPH reported results of tests on 308 Evanston residents today with three returning positive results for a positive rate of 1%. Two of the new cases reported today were in the north Evanston 60201 ZIP Code, the other one in the south Evanston 60202 ZIP Code.