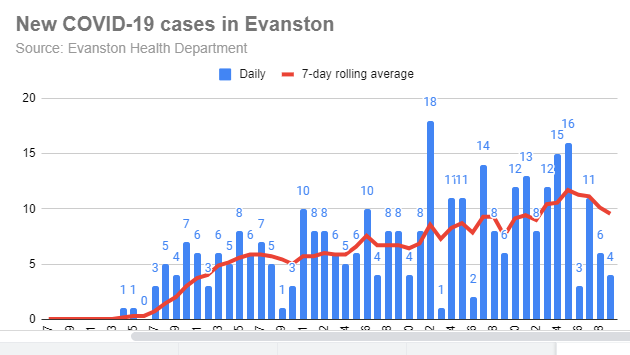 Evanston reported four new COVID-19 cases today, bringing the city’s total to 328. Across Illinois there were 2,253 new cases, raising the statewide total to 50,355.

The state reported the results of 14,478 more COVID-19 tests today, for a total of 256,667 tests performed during the pandemic so far. The count of new cases today was the second highest ever. Positive results were returned in 15.6% of the tests conducted. That’s down from a positive results rate above 20% before the recent surge in the number of tests conducted.

Gov. J.B. Pritzker, at his news conference this afternoon noted that the White house guidelines for beginning a phased reopening of business activity call for seeing a downward trajectory of COVID-like syndrome cases reported for a 14 day period. So far the case counts in Illinois remain on a generally upward trend, although Evanston has seen what may turn out to be the first few days of a downward trend.