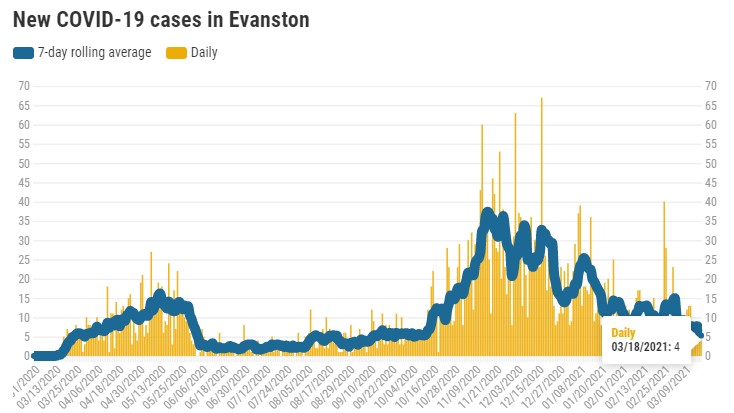 The Illinois Department of Public Health today reported that 99,210 people were vaccinated yesterday. The seven day average is up slightly from the level of a week ago.

A total of 4.36 million vaccine doses had been administered as of yesterday, about 78% of the total 5.6 million doses distributed to the state by the federal government. The IDPH says 12.91% of the state’s population is now fully vaccinated.

Reported COVID-19 deaths in Illinois increased today, but the seven day average is down from a week ago.

The number of COVID-19 tests reported rose today, but the seven-day test average is down slightly from a week ago.

The IDPH reported tests of 1,336 Evanston residents today, compared to 358 yesterday. The IDPH found seven positive cases here for a daily positive rate of 0.5%. The seven-day positive rate is essentially unchanged from a week ago.

As of last night, 1,120 people in Illinois were reported to be in the hospital with COVID-19. Of those, 252 patients were in the ICU and 100 of those were on ventilators.