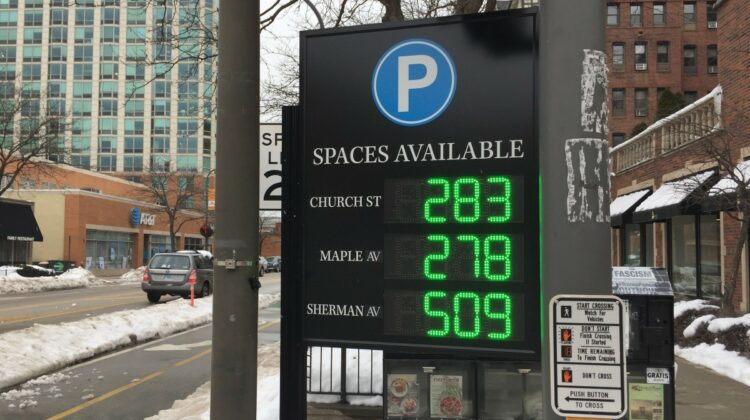 Evanston's downtown parking garages usually have plenty of spaces available, as in this photo from February 2021. (Jeff Hirsh photo)

The Evanston City Council Monday is scheduled to consider a plan to eliminate first-hour-free parking and free Sunday parking at the city’s three downtown parking garages.

Both have been long-term features of the city’s parking rate structure.

In a memo, Parking Manager Mike Rivera says that at this year’s usage level charging $1 for the first hour in the garages would generate nearly $367,000 more revenue, and that the cost for the first hour of garage parking would be just half the cost of the $2 hourly fee for most on-street parking downtown.

Rivera says the Council might also consider shortening the free garage parking period from an hour to a half hour instead.

Sunday garage parking has fallen by more than half during the COVID-19 pandemic, and Rivera estimates charging for Sunday parking could generate between $50,000 and $255,000 in new revenue — depending on whether Sunday parking recovers to pre-pandemic levels.

As for on-street and surface lot parking, Rivera is proposing that the city reduce rates at certain underutilized spots from $2 to to $0.50 an hour and increase the maximum time limit at those locations from the current 2 or 4 hours to 12 hours.

HE says those changes would provide a more affordable parking option for people who are willing to walk a few minutes to their destination and would offer a new option for part-time service workers who may need to park their vehicles for an extended time.

The on-street parking areas that would be changed include the 600 block of Washington Street, the 800 block of Custer Avenue and the 2500 and 2600 blocks of Prairie Avenue.

Rivera is also proposing that the city standardize fines at $75 for most “safety-related” and “traffic obstruction” violations. While some of those already cost $75, several others now carry only a $55 fine.

Parking within an intersection, on or near a crosswalk or fire hydrant and on a bridge or parkway or under a fire escape would be among the fines that would increase.