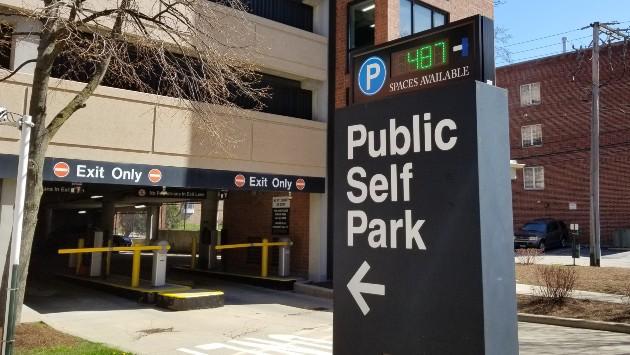 Ald. Devon Reid (8th) said churches don’t pay property taxes and so perhaps the city shouldn’t be providing a parking subsidy to them.

He suggested as a compromise that, rather than charging regular weekday rates, the city could set a $1 fee for all-day Sunday parking in the garages. But that idea brought no “amens” from other council members, most of whom spoke in favor of keeping Sundays free.

Parking Manager Mike Rivera said the city also could set up a validation system that would let churches provide free parking to members of their congregations, but Ald. Cicely Fleming said, “validating to go to church sounds absurd.”

On the other hand, despite opposition from the Downtown Evanston merchants group, the alders did approve a plan to end first-hour-free parking in the garages the rest of the week. They voted to impose a $1 rate for the first hour.

Mayor Daniel Biss asked Economic Development Manager Paul Zalmezak before the vote whether there’s a connection between parking fees and economic development and the impact of an increase on small businesses downtown.

But the planner, Zalmezak said, added that at some point price-sensitivity does set in, and if parking rates are set too high, it can be a deterrent to shoppers.

The new $1 charge for the first hour in the garages will be half the first-hour fee for most on-street parking in downtown Evanston.

Rivera said that even at currently depressed parking levels the end to first-hour-free parking could generate about $367,000 in new revenue a year, while the elimination of free Sunday parking could have generated between $50,000 and $255,000 — depending on whether Sunday parking recovers to pre-pandemic levels.

The rate change is scheduled to take effect Jan. 1.