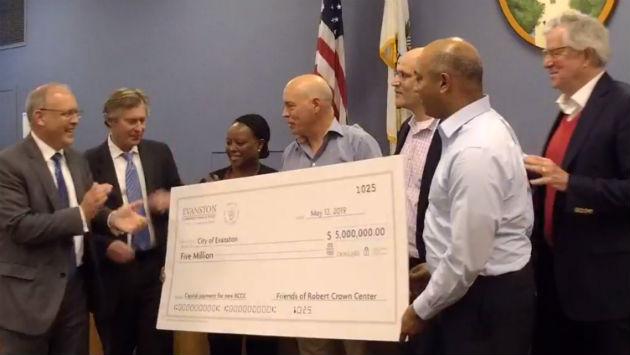 The Friends of the Robert Crown Center turned over a $5 million ceremonial check to city officials at Monday night’s Evanston City Council meeting to support the $53 million recreation center project.

The Crown construction site this morning.

Construction work continues on the center, which will feature two ice rinks, a gymasium and running track, an early childhood education center and a branch library.

The building is scheduled to open late this year, with artificial turf fields around the site to be completed in 2020.

Mayor Steve Hagerty praised the Friends group — which so far has raised about $12.5 million in cash and pledges toward an ultimate $15 million goal for voluntary contributions toward the project.

Alderman Don Wilson, whose 4th Ward includes the project site at Dodge Avenue and Main Street, called it an example of the community coming together to provide a new facility that will serve everyone in the community.