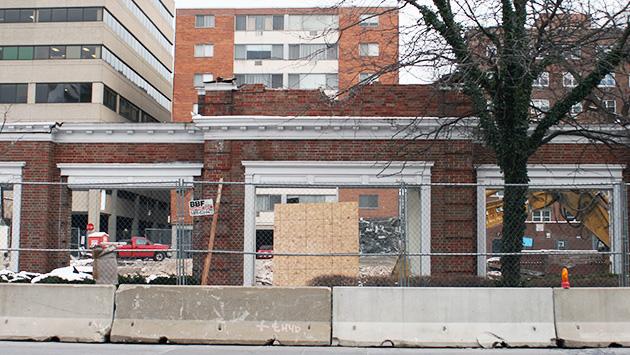 Owners of of a downtown Evanston commercial building say city officials are obstructing their plans to replace it with a extended stay hotel..

Instead, says Robert Barr, a real estate advisor to the trust that owns the property, the city wants an office building on the site — a project Barr says is not economically feasible.

So the owners are tearing down the building — with plans to leave it a vacant lot to reduce their property tax bill if they can’t win approval from the city for an economically-viable project.

The one-story colonial-revival style building at 1515 Chicago Ave. was built around 1950 and once housed the Tally Ho restaurant. It more recently served as offices for the Heil & Heil Insurance Agency, which has now moved to Skokie.

Barr, who says he’s been in the real estate services business for over 30 years and worked for clients on transactions for nearly 5 million square feet of property, says city officials who say they want new office construction downtown “have no idea what it costs to build an office building.”

He says that construction costs, operating expenses and high taxes here would mean a downtown building with a parking structure would have to charge over $50 a square foot in rent — roughly $20 more than the rent on existing Class A commercial space in town.

And, because Evanston is hard to get to from suburbs to the west, Barr says, there’s not a big demand for office space here.

City officials have recently been pushing the idea of new office construction as a way to draw more jobs to town, and as a substitute for the condo construction that boomed in Evanston a decade ago, but then collapsed during the financial crisis starting in 2007.

The city has been pushing for an office development on a vacant lot on the southeast corner of Main Street and Chicago Avenue — and has seen that as the centerpiece of a new tax increment financing district. But the developer the city has been working with on that project has so far failed to land the tenants needed to secure construction financing for it.

Barr says his clients have an agreement to sell the 1515 Chicago property to a developer who would construct a seven-story extended stay hotel on the site — if it could win city approval.

He said the developer settled on the extended stay hotel concept after city officials said no to another rental apartment project.

Several new rental apartment buildings are now under construction in the city, and apartments “would have been a no-brainer,” Barr said, but the city didn’t want it.

The extended stay plan would be for “a national, high-quality brand with a little retail on the first floor.”
With the hotel tax, “it would provide $500,000 to $600,000, if not more, in annual revenue to the city,” Barr said.

“But now it looks like the site will be a vacant lot, with taxes substantially reduced because there’ll be no structure on the site,” he added.

Calls this morning to Alderman Judy Fiske, whose 1st Ward includes the 1515 Chicago Ave. site, and to the city’s community and economic development director, Steve Griffin, were not immediately returned.

Update 4:15 p.m.: Community and Economic Development Director Steve Griffin says the city has put Barr in touch with two different developers who wanted to build office projects on the site, but that the land owner and developers failed to reach agreement on terms of a deal.

"I'm disappointed that he'd say there's no office market here, when in fact I know that we've sent him two prospects," Griffin added.

Griffin said that while the city would prefer an office project for the site, it's willing to entertain any proposal for the property.

A hotel, Griffin said, would require approval as a special use, which would be reviewed by the Zoning Board of Appeals.

An office development would require approval as a planned development, which would be reviewed by the Plan Commission.

Either way, a final decision on either type of project would be up to the City Council — which has substantial discretion in considering either type of request.

While the alderman of the ward where a project is located can be influential in determining whether a special use is approved — their support is not always essential — as shown by the City Council'sapproval in 2011 of a bed and breakfast in the 1st Ward despite opposition from Alderman Fiske.

He added that the developers of the proposed office building at Main Street and Chicago Avenue have lined up at least one tenant for the building and have submitted engineering and other details of the project for the city's site plan review — although he said he didn't know whether financing to construct that building has been secured yet. 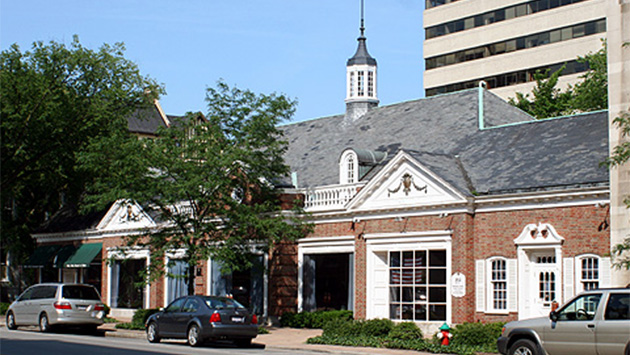 In 2006 the 1515 Chicago Ave. building was considered by the city's Preservation Commission as a possible landmark building, but it was dropped from consideration after commission members concluded it had little architectural merit.

That year the properety was proposed as part of an 18-story mixed-use retail, office and condominium project on the southeast corner of Chicago Avenue and Davis Street called Optima Promenade, which city officials ultimately rejected.

The following year a smaller condo project was proposed for just the 1515 Chicago Ave. site, but that plan never got off the ground.