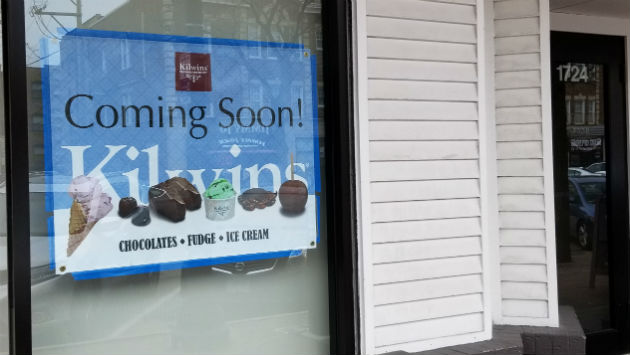 Evanston’s Zoning Board of Appeals Tuesday night recommended approval of a special use permit for a planned Kilwins Chocolates shop in a vacant storefront at 1724 Sherman Ave.

Franchisee Jeff Schneider told the board it will be his first Kilwins outlet and that he plans to have the store open from 10 a.m. to 11 p.m. with at most five eimployees on site at a time.

The building, Schneider said, has limited alley access, and so he plans to have deliveries made through the front of the store. The board recommended that deliveries be restricted to the hours before 9 a.m. each day.

Schneider said he’s in discussions with his landlord about possible renovations to the exterior of the building.

Board member Lisa Dziekan said she’s been to other Kilwins shops on vacation, when she heard about this store she thought, “Well, we’re becoming a vacation town! It’s a nice use, I’m loopking forward to seeing it.”

The board also recommended approval of a special use for planned expanson of Backlot Coffee on Central Street.

Owner John Kim wants to expand the shop at 2006 Central St. into the adjacent storefront at 2004 Central.

Kim says he plans to double his seating capacity with the expansion, and also add a new kitchen that will be used to prepare more food in house.

“We’ll bake or scones in house,” Kim said, and prepare burritos and salads.

All the food he indicated would be packaged and ready to go rather than prepared to order. With more food being prepared on site, he said, deliveries to the coffee shop will probably decrease.

Board member Scott Gingold said approving “the expansion of a successful existing business seems like a no-brainer to me.”

Both proposals now go to the City Council for final action.