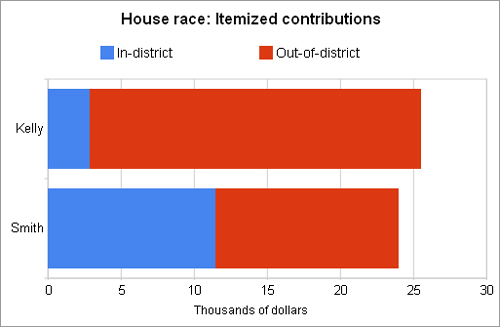 With almost a half-year to go before the primary, Democratic candidates for the Illinois house seat representing Evanston have already raised more than $65,000 for the campaign.

With almost a half-year to go before the primary, Democratic candidates for the Illinois house seat representing Evanston have already raised more than $65,000 for the campaign.

Reports filed with the state board of elections show that Eamon Kelly, 29, is leading the fund-raising derby with $36,000 in cash and in-kind contributions.

Both are way ahead of Patrick Keenan-Devlin, 25, who reported raising just over $100 as of June 30, the cutoff date for the finance reports to the state due this week.

All three candidates are from Evanston.

Both of the leaders in the race have been trolling widely for campaign funds, with reports showing about 89 percent of Kelly’s itemized contributions and 52 percent of Smith’s coming from people listing addresses outside the district.

In-district contributions have come exclusively from Evanston and Rogers Park, with none from the more conservative precincts in Kenilworth, Glencoe, Wilmette and Winnetka.

All three candidates have been using the ActBlue online fund-raising hub for Democratic candidates.

In the state records, large contributors to the Smith campaign include the candidate himself at $2,400, former Evanston alderman Steve Engelman at $2,300 and Victor and Modesta Smith of Park Ridge at a total of $4,800.

Eight people, none from within the district, have contributed $1,000 or more to Kelly’s campaign. Most of those donors listed their occupation as attorney.

The 18th District house seat is currently held by Julie Hamos, who has indicated she plans to run for statewide office next year.