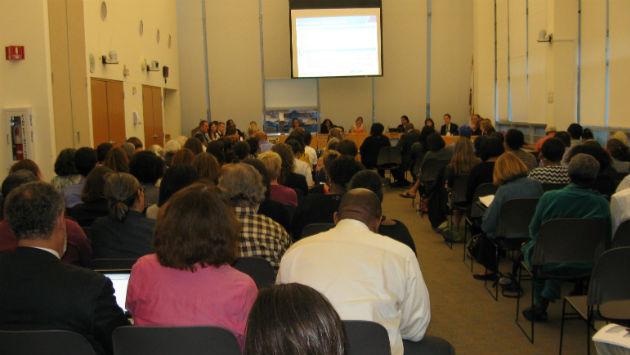 A special meeting of the Evanston/Skokie District 65 School Board Monday night yielded a great deal of complaints from the black community, but few suggestions for how to deal with a persistent gap between the achievement of white and black students in the district.

The first hour was spent in examining the data, and it wasn’t a pretty sight.

But the data also showed that traditional day care is not an adequate preparation for kindergarten, while those students, both white and black, who had enrolled in pre-school programs more often arrived at the school doors ready and willing to learn.

While much of this is a family responsibility, there was very little talk during the four-and-a-half-hour session about the role of the family, which represents a primary thrust of the fairly recent initiative of the cradle-to-career movement that involves not only the public schools, but the many not-for-profit organizations and private pre-school facilities that contribute to the results.

Many of the black parents blamed what they called “institutional racism” for the inability of their children to succeed, which is a factor that has been high on the agenda for change in both District 65 and the high school, District 202.

Former board member Terri Shepard suggested that perhaps the district ought to consider seminars by the controversial Pacific Educational Group that was hired by District 202 several years ago to deal with institutional racism.

While it did not come up in the public comments from the black parents, school board member Suni Kartha suggested that the district’s policy of busing students, practically all of them black, to mostly white schools so as to create an integrated mix was possibly a mistake.

She called this the “elephant in the room” that ought to be reviewed, particularly as it is an expensive operation that could possibly yield funding for tutoring and other techniques for helping struggling students.

Contrary to the integration situation was a suggestion by many of the parents that the district ought to increase the number of black teachers in the system, as there was an assumption that they would better understand the issues that black students need to deal with.

After the public comment, each of the board members expressed their gratitude to those who turned out, and they pledged to devote much of their attention to exploring ways to make changes that would produce a more acceptable outcome.