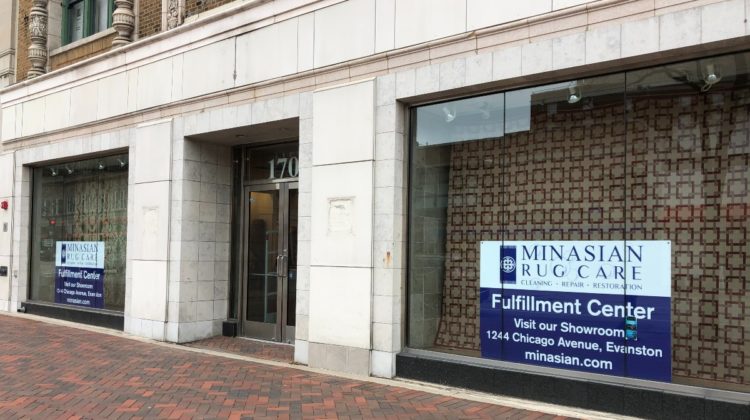 When the Gap clothing store downtown closed last year, it left a very big gap on Sherman Avenue. Now, that gap has been filled, at least temporarily, by a local oriental rug business.

It’s a visual and economic plus for a downtown that has been hit hard by pandemic-related shutdowns.

Minasian Rug Company, which has a retail store on Chicago Avenue, is using the former Gap site in the one-time Varsity Theater building as a “fulfillment center,” where, according to owner Armen Minasian, 10,000 rugs are kept, and where wholesale orders are processed and shipped.

Minasian has been at the Sherman Avenue location since January, but you might not have realized it until this week, when signs went up in the windows.

“I couldn’t just put paper on the windows,” Minasian told Evanston Now. He said he wants to help “dress up the street,” with “nice window displays” which will be changed every couple of weeks. While the location is not a walk-in store for retail, Minasian said he might open it for visitors as part of any street fairs which may take place.

Paul Zalmezak, the city’s economic development manager, said having a temporary tenant is a “great way to manage a vacancy,” and added that Minasian has done a nice job making the once-empty store look better.

It’s uncertain how long the temporary use will last. Building owner Steve Rogin said “it’s awesome having an active use” for the site while he and the city work on longer term plans. Rogin said he wants to open up the length of the building along Bookman’s Alley, creating small shops and also having residences above.

“I want to activate the alley and create a unique community space,” he added.

Having a tenant in the Gap site, even temporarily, is a step in what promises to be a long journey to revitalize downtown business. Zalmezak said there are currently 45 vacant storefronts out 220 in the central business district.

He said the city recently passed an ordinance banning brown paper coverings on vacant storefront windows, but more enforcement is needed. Also, he said, City Council this week OK’d new rulles speeding up the permit application timeframe, eliminating an “onerous 90 day process” where a developer basically had to wait before starting work.

Those may seem small, but a lot of things have to happen for downtown to recover from the pandemic. “We have some work to do,” Zalmezak said.