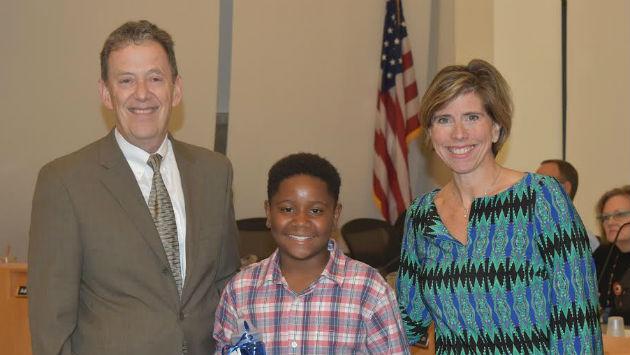 Concerns about an achievement gap between white and black students in the Evanston/Skokie School District 65 were eased somewhat Monday night when a student at Chute Middle School was recognized by the school board as being among the top black students nationwide.

The recognition was focused on Eyan Simms, a sixth grader who was recently named a Pop Warner Academic All-American through his participation on the North Shore Panthers football team.

Eyan’s award places him in the top 2 percent academically of more than 350,000 kids across the country who participate in the Pop Warner program.

“I am very proud of Eyan for being named an Academic All-American and, more importantly, for his incredible work ethic both on and off the field,” said District 65 Superintendent Paul Goren. Eyan was recognized by the board (on his birthday, incidentally) as the first Evanstonian to be so honored in the 40-plus-year history of the program.

“I am very honored and excited to be an All-American,” Eyan declared, “and have always pictured myself playing a sport and getting good grades in college.”

He added: “This award has shown me that my dreams can come true if I continue to work hard in school.”

The All-American Scholar Program requires a minimum 96% grade point average, taking into account a student’s final grades from the prior school year and considering activities and achievements.

Eyan had already been recognized for his terrific work by Chicagoland Pop Warner, Mid-American Pop Warner, and also this summer at the National All-American Banquet in Disney World.