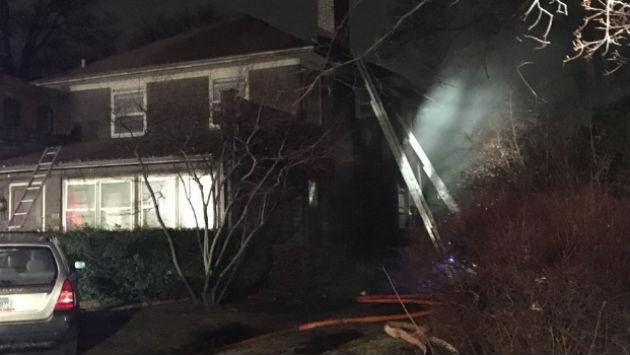 Evanston fire crews are battling a garage fire at 611 Ridge Ave. at this hour.

The garage reportedly is fully engulfed in flames and the fire has reportedly spread to the house.

No reports of injuries so far.

Fire crews from neighboring towns have responded to help Evanston firefighters with the blaze.

Fire officials on the scene say it appears two residents of the home will be displaced because of damage from the fire.

Update 7:15 p.m.: The fire has now been extinguished and some fire units are leaving he scene.

Update 7:40 p.m.: Ridge Avenue now is being reopened to traffic.

Update 6 a.m. 3/1/18: Fire Division Chief Paul Polep says the two-car garage was fully involved in fire when the first crews arrived about 6:20 p.m and that the fire was already spreading to the nearby house.

He says fire crews managed to quickly extinguish both fires — and rescued a pet cat from the home.

The garage was a total loss but the home sustained only moderate smoke and water damage.

The cause of the fire remains under investigation.