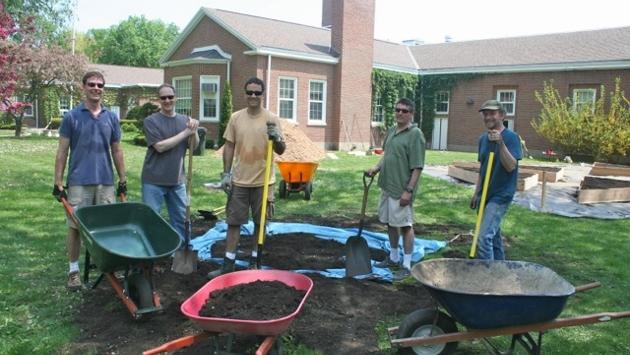 In the old days, a school had classrooms, a playground, an auditorium, a gym, and a lunchroom, and that was about it. Today, elementary schools throughout Evanston/Skokie District 65 have a new common element—a vegetable garden.

The movement began here about 11 years ago. Today, 14 schools have edible gardens of varying size and maturity, aided and abetted by a group called SAGE, which stands for Schools are Gardening in Evanston.

Typical is the Star Garden, which was installed last week at Lincolnwood Elementary School, thanks to many hours of hard digging and schlepping by a group of parents, teachers, and students.

Designed by Lincolnwood parent and landscape architect Paul Williams, the raised garden beds are laid out in the shape of a star, hence the name.

Even before construction of the beds at Lincolnwood last weekend, students were getting their hands dirty. In April, Lincolnwood kindergarten, first and second graders planted spinach, lettuce, kale, swiss chard and arugula. Third graders added to the garden’s variety by planting nasturtiums–edible flowers.

In addition to planting, students were treated to a lesson on worms and soil, led by local master gardener and member of the Lincolnwood Garden Committee, Joan Kerr, who wowed the kids with red wiggler worms and explained how worms aid in the composting process.

Children also learned about the many things that can go into compost bins and eventually break down to make soil rich with nutrients.

Funding for this project is from the combined resources of Lincolnwood families, in-kind donations, District 65, and a $2,000 grant from the Whole Kids Foundation of Whole Foods.

An official ribbon-cutting is planned for September, according to school officials.

SAGE is a program of the Evanston Environmental Association, a volunteer group that partners with Evanston schools and many organizations to provide garden meetings, an online message board, resources, best practices, trouble shooting, guest speakers, and collaborations.

The beauty of gardens, from an educational standpoint, is that they are cross-disciplinary, which means they teach the kids a number of important skills and scientific information, including water conservation, recycling, composting, and what it means to grow food organically.

SAGE conducted a study last year of school gardens in the district and found that they fell into three categories: advanced, intermediate, and beginning.

In the Advanced category were gardens at Dawes, Kingsley, and Washington schools. Among the earliest gardens established in the district, these gardens had strong support from school principals as well as community partners and were especially fortunate to have generally consistent leadership, according to SAGE.

In the Intermediate category were the gardens at Dewey, King Lab, Oakton, and Orrington.

Proponents of the school gardens are quick to point out that kids who formerly turned their noses up at vegetables at the dinner table are now fascinated with them, now that they have seen them in the raw, so to speak.

It’s not far-fetched, they say to believe that kaleand spinach might some day become the new macaroni and cheese on the list of kids’ favorite foods, thanks to their involvement with their elementary school gardens.