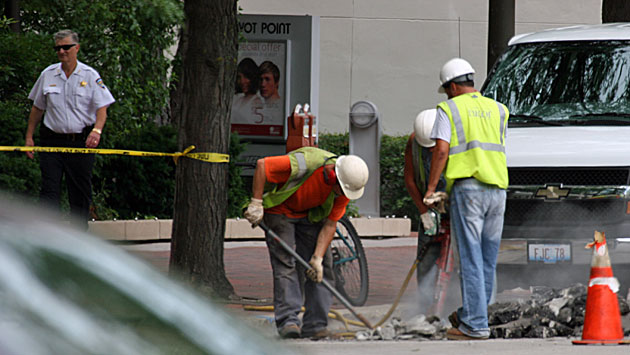 Update 1:45 p.m.: Nicor crews managed to cap off a ruptured high-pressure gas line about 90 minutes after it forced the evacuation late this morning of a block-long stretch of downtown buildings — including the Rotary International headquarters.

Fire Chief Greg Klaiber says the high-pressure line broke directly in front of the Rotary building at 1560 Sherman Ave. as a Nicor crew was attempting to attach a low pressure line to it about 11 a.m.

A strong odor of natural gas could be smelled down wind from the break. And near the intersection of Sherman with Davis Street, the rushing sound of the leaking gas was louder than the nearby fountains in Fountain Square.

Klaiber says that at the recommendation of Nicor officials fire and police evacuated the Rotary building, as  well as most other buildings on either side of Sherman from just south of Davis to just south of Grove.

The break gave many downtown workers an early start on their lunch hours, but by 1 p.m. streets were being reopened to traffic and people were being allowed to return to stores and offices. 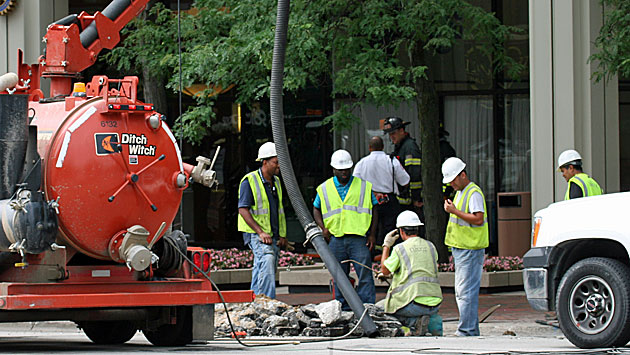 Top: Police Chief Richard Eddington walks past the Rotary International Building as a Nicor crew tears up Sherman Avenue in an effort to repair the gas leak. Above: Nicor workers with the Ditch Witch truck brought in to help cap the gas leak.

While dozens of fire and police units and Nicor trucks were on the scene, people walking on the street downtown seemed to be taking the event in stride with some watched the repair work while listening to a musician playing in the Chandler's Building plaza at Sherman and Davis.

Rotary officials announced shortly after the evacuation began that their building would remain closed for the rest of the day.

Klaiber says about 1,000 people had to leave the Rotary building. "Some were not too happy to leave," Klaiber said, but it was a "somewhat controlled evacuation" and no injuries were reported.

The incident brought out three fire engines, a truck, a batallion chief's car and an ambulance as well as numerous Evanston and Northwestern police officers, city parking enforcement officers and Community Emergency Response Team members to help direct traffic around the closed-off streets.