A dispute over a gate blocking access to a private parking lot stalled approval Monday of a city grant to rehabilitate a building that provides housing for disabled adults. 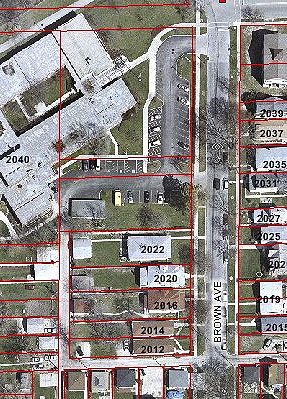 A neighbor of the Hill Arboretum Apartments at 2040 Brown Ave. complained to aldermen at the Planning and Development Committee that the gate, installed by the city at the north end of a public alley adjoining the property, inconveniences neighbors.

Eric Hoffman, executive director of the Over the Rainbow Association, which operates the apartment building, said traffic through the building’s parking lot from the alley had become a hazard to building residents, and that one wheelchair-bound resident had been hit by a car within the past year.

The L-shaped alley exits onto Brown Avenue at its south end, but it is narrow enough that city garbage trucks have difficulty making it around the turn in the alley.

In response to concerns of the apartment building residents, city staff last fall installed the gate at the north end of the alley so garbage trucks could exit there, while other vehicles could be blocked.

Alderman Delores Holmes, 5th Ward, asked to delay action on the request for $366,253 in federal HOME funds for the project so she could work out a compromise with neighbors.

The grant is planned to provide kitchen renovations, heating repairs and other improvements to the building, which provides 33 affordable, barrier-free, wheelchair-accessible apartments.

The site is the former home of Evanston’s Community Hospital, which closed three decades ago after providing care to the city’s black community starting at a time when the other hospitals in town turned away black patients.