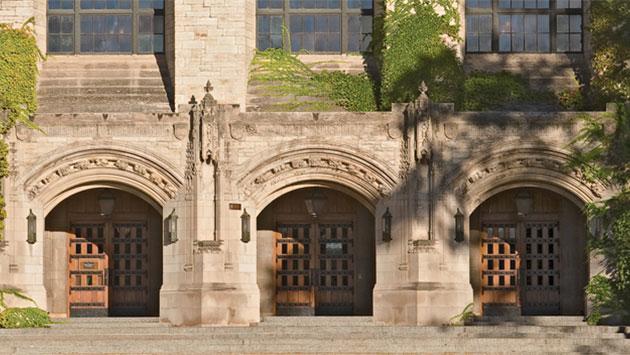 Northwestern University alumna Leslie C. Devereaux has made a substantial commitment to benefit several areas at the school, including th library, undergraduate scholarships and the athletic department.

A large portion of the commitment will serve as a lead gift for the transformation and renovation of the University’s Charles Deering Library, where Devereaux enjoyed studying when she was a Northwestern student in the early 1960’s.

“We are deeply grateful for Ms. Devereaux’s generosity over more than three decades. Her support has helped make the Library the outstanding resource it is today for the entire University community,” said Sarah M. Pritchard, dean of the school's libraries.

“Her latest gift will serve as a catalyst in the effort to transform Deering Library, allowing generations of Northwestern alumni to reconnect with the library they remember so fondly, while offering current students, faculty and visiting researchers the full advantages of this restored and revitalized space.”

The Deering transformation aims to restore the 82-year-old building’s Collegiate Gothic-style architecture while bringing technology, learning spaces and other improvements that better meet the needs of library users in the 21st century.

In 2012, the newly renovated entryway of Deering Library reopened for the first time in more than four decades. The historic lobby entrance now has ADA-approved accessibility ramps, improved climate control systems and a proper security system.

Moving forward, plans include restoring the stained glass and conserving the classic woodwork, carvings and other artwork.

The project will also improve the lighting and update environmental controls and security of the collections, increase access to the music and art collections, reestablish classrooms, and create a more secure reading room for the use of rare books, manuscripts and archival materials.

Library visitors will have increased ability to use Wi-Fi, laptops and other devices. And new spaces will host author readings, lectures, receptions and other events.

The gift also will be used to help digitize the University’s Football Films Collection, which dates back to 1929 and includes hundreds of hours of fragile footage.

This collection, held by the Northwestern University Archives, includes footage of the 1949 Rose Bowl game and the notorious 1982 “Lake the Posts” win over Northern Illinois, which snapped a 34-game losing streak. (Inspired fans ripped down the goal posts and marched a mile east before tossing them into Lake Michigan.) Once the films are digitized and preserved, they will be available to college football fans around the world.

Devereaux has long cheered on Northwestern’s student-athletes and programs. Therefore, a part of the gift has also been designated for unrestricted use for the Department of Athletics and Recreation.

Devereaux received a bachelor’s degree in English from Northwestern’s Judd A. and Marjorie Weinberg College of Arts and Sciences in 1964. A member of the Alpha Phi sorority, she served as treasurer of the Women’s Athletic Association’s Executive Board during her sophomore and junior years.

“My college years were among the most influential and memorable of my life,” said Devereaux, who is celebrating her 50th class reunion this fall. “It is my hope that my gifts will contribute to an extraordinary experience for current and future Northwestern students.”

Devereaux is president and treasurer of the Richard C. Devereaux Foundation, named after her late father, former president of the Ferro Stamping Company (later called Ferro Manufacturing Corp.) in Detroit.

The recent Devereaux gift is part of We Will. The Campaign for Northwestern, a $3.75 billion University-wide fundraising initiative.

The University Library, scholarships and Athletics and Recreation are some of the areas in which Northwestern will invest its resources most heavily in the coming years. More information on the Campaign is available at wewill.northwestern.edu.