The City Council Monday voted to accept a $12,000 donation from the Cherry Family Foundation to buy a battery powered electric scooter for Evanston’s police department. 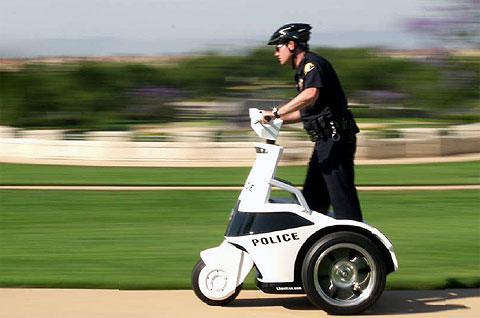 The scooter, called a T3 Personal Electric Vehicle, is produced by T3 Motion of Irvine, Calif.

Police Chief Richard Eddington said the scooter is "highly visible, but allows for a stealthy approach when needed."

He added that it "enhances officer-citizen contact, but still renders a command presence" and that he anticipates using it for high-profile neighborhood patrolling.

Asked by an alderman why the city wasn’t opting for the two-wheel Segway scooters used by the Chicago Police Department, he said officers are less likely to fall off the three-wheeled design.

The donors say they’re also impressed with the environmental impact of the vehicle, which the company says cost 10 cents per day to operate, and that the cost of recharging its batteries is equivalent to getting over 500 miles per gallon from a gas-powered vehicle.

The vehicle comes equipped with LED emergency lights and a siren. It has a maximum speed of 25 miles per hour and a zero-degree turning radius.